I’ve made Nigella’s peanut butter noodles a lot (A LOT!!) through the years. It’s the easiest ‘instead of takeaway meal’ you can make at home and sooo satisfying. It’s lovely as it is, but when I saw that Deb at Smitten Kitchen added thinly sliced cucumber to her peanut butter noodles I thought I better try that and make sure I’m not missing out on something.

Since I already love Nigella’s noodle recipe and the Smitten Kitchen one seemed more cumbersome to make (the whole point here is ease) I thought I could just add the sliced cucumber to the noodles I usually make and see how that works out. And wow! It’s amazing how the addition of a thinly sliced watery vegetable without that much flavour to it, can take this dish to a whole other level!

When I make the peanut butter noodles I usually omit the vegetables in Nigella’s recipe and I’ve never cared for the sesame seeds, so I just top the noodles with coriander, lime and chopped salted peanuts. So without really trying to, I have changed the recipe enough to warrant an update of it here.

The addition of thinly sliced cucumber (best made using a cheese slicer – not a knife) is now my go-to version to eat it as it adds a freshness to it that’s just amazing together with coriander and lime. But sometimes I also add crispy chillies in oil to the mix as it’s good on practically everything!

In a large bowl, mix together the dressing ingredients. Add the noodles and mix well. Divide between bowls and top with chopped peanuts and coriander. Place the sliced cucumber on the side of the bowl and serve with a lime wedge. 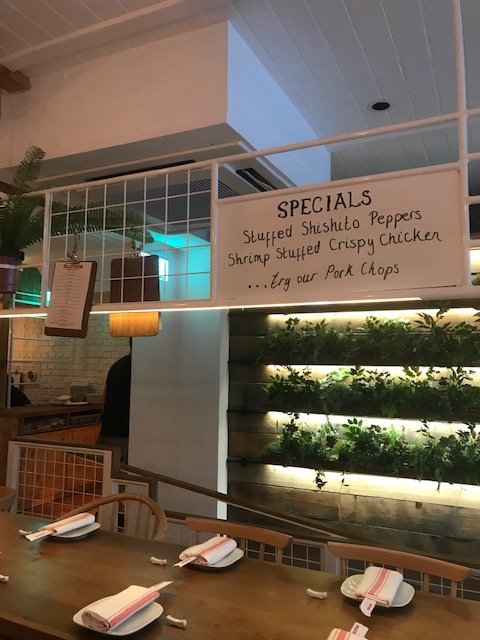 One Saturday night with no plans, my friend and I after a few texts suddenly had made dinner plans; to meed about 40 minutes later in Covent Garden. Even though I like to plan ahead most of the time, I find it so refreshing to make plans last minute. Especially when I live in a city like London with lots to offer. 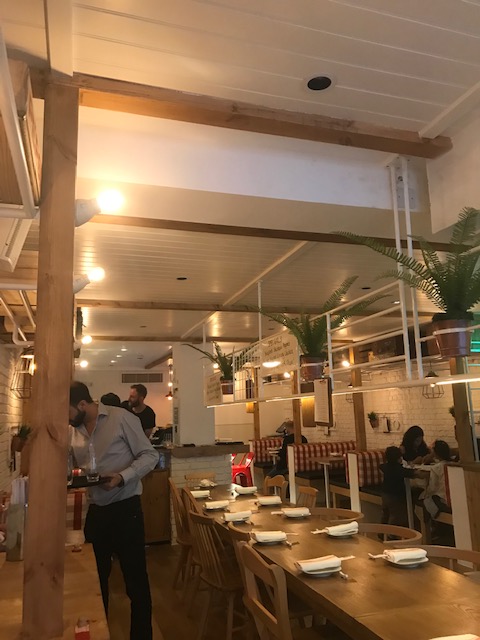 My friend Ro suggested a new place, that still was in it’s soft-launch place, as she’d been to the New York restaurant and loved it. Always keen to try new things I thought that was a great idea and was really happy when we got a table on arrival (although now that they’re properly open I would recommend making a reservation beforehand). 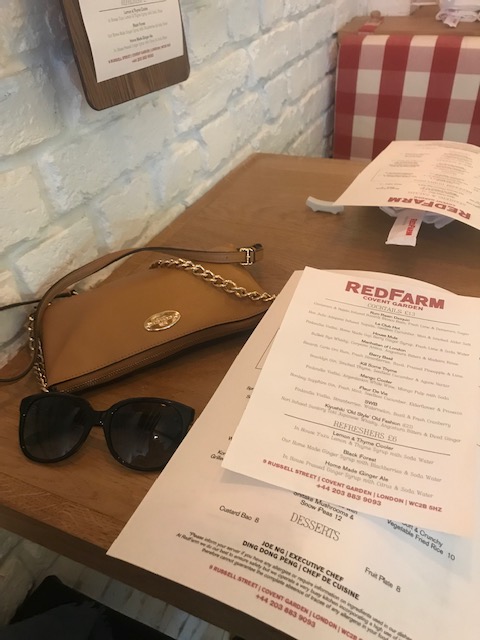 Located next to another New York satellite, Balthazar, I definitely think Red Farm is here to stay. I really liked their concept of yummy but fun food and wish more restaurants would be creative in that way. 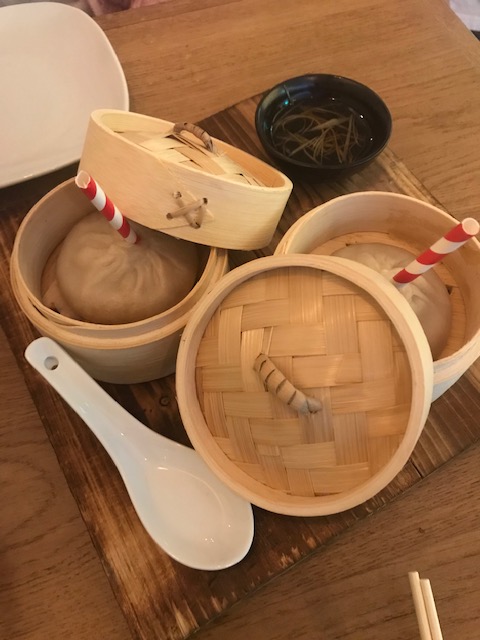 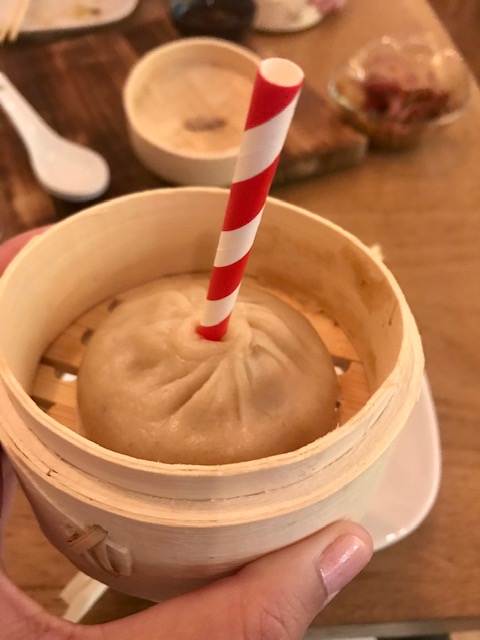 Like these pork and crab soup dumpling size XXL that comes with a straw! It’s a genius way of eating it, first drinking the soup and then eating the dumpling. So yummy! My only criticism was that the dumpling spoons were a little bit small for that dumpling size. 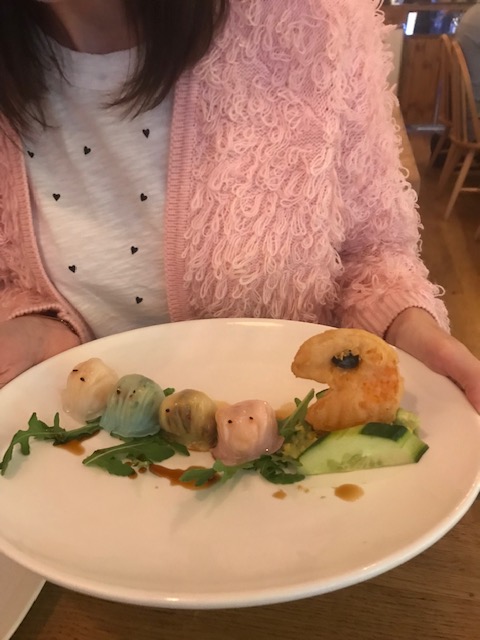 Their most iconic dish though, is probably this one; Pac Man shrimp dumplings complete with different coloured ghosts! So fun and very well executed. 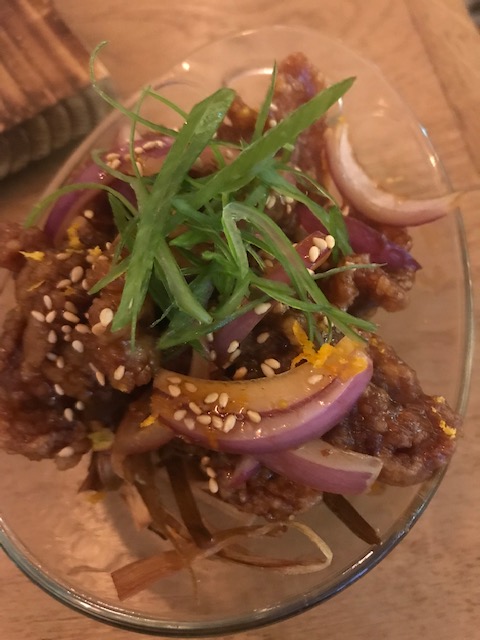 One of the best dishes was this starter though; the marinated and grilled pork belly. It had sweetness, lots of umami and a nice crunch. So moreish!! 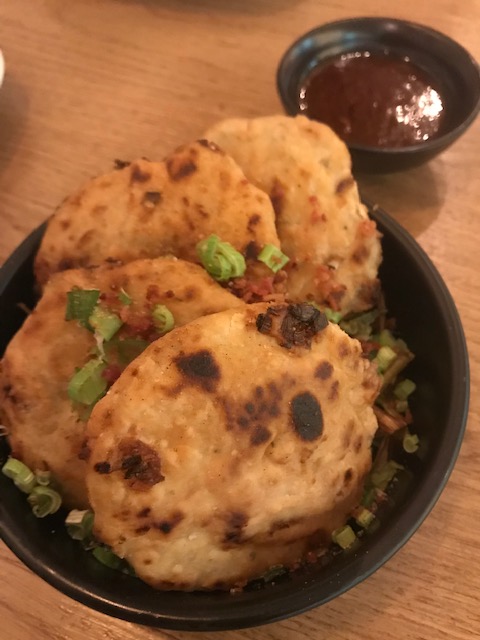 The scallion pancakes with smoked bacon were also really nice, but a little rich. 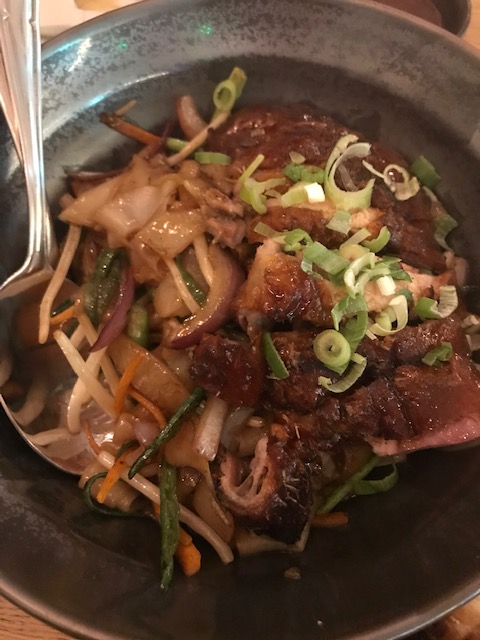 Another favourite was the wide rice noodles with roast duck. Again full of umami (seems to be their thing) and lots of earthy flavours. We also had some broccoli on the side, and although nice, it’s not really the vegetables you come here for – it’s the rich satisfying umami dishes, perfect for the autumn ahead! 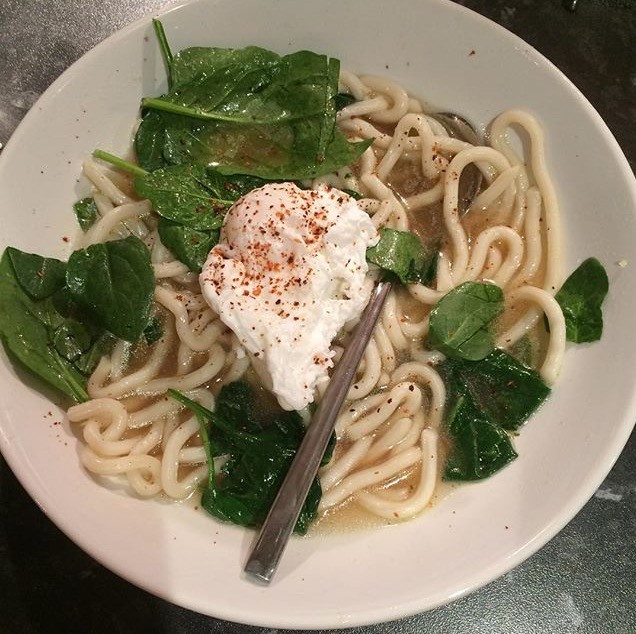 This simple and very comforting dish (funny how foods not involving melted cheese can be comforting, but they can!) I found in Vogue of all places, i.e. not where I usually get my food inspiration from, but it’s nice they write about food as well as fashion.

The only slightly daunting part of this meal is poaching eggs, but if you have the freshest of eggs and a slotted spoon you’re halfway there. Further instructions here.

1 portion udon noodles, cooked according to the instructions on the packet

Heat up the stock. Blanch the spinach in boiling water and squeeze it dry. Pour the stock into a bowl. Add noodles and spinach and lastly the poached egg. Sprinkle with chilli flakes or Aleppo pepper. 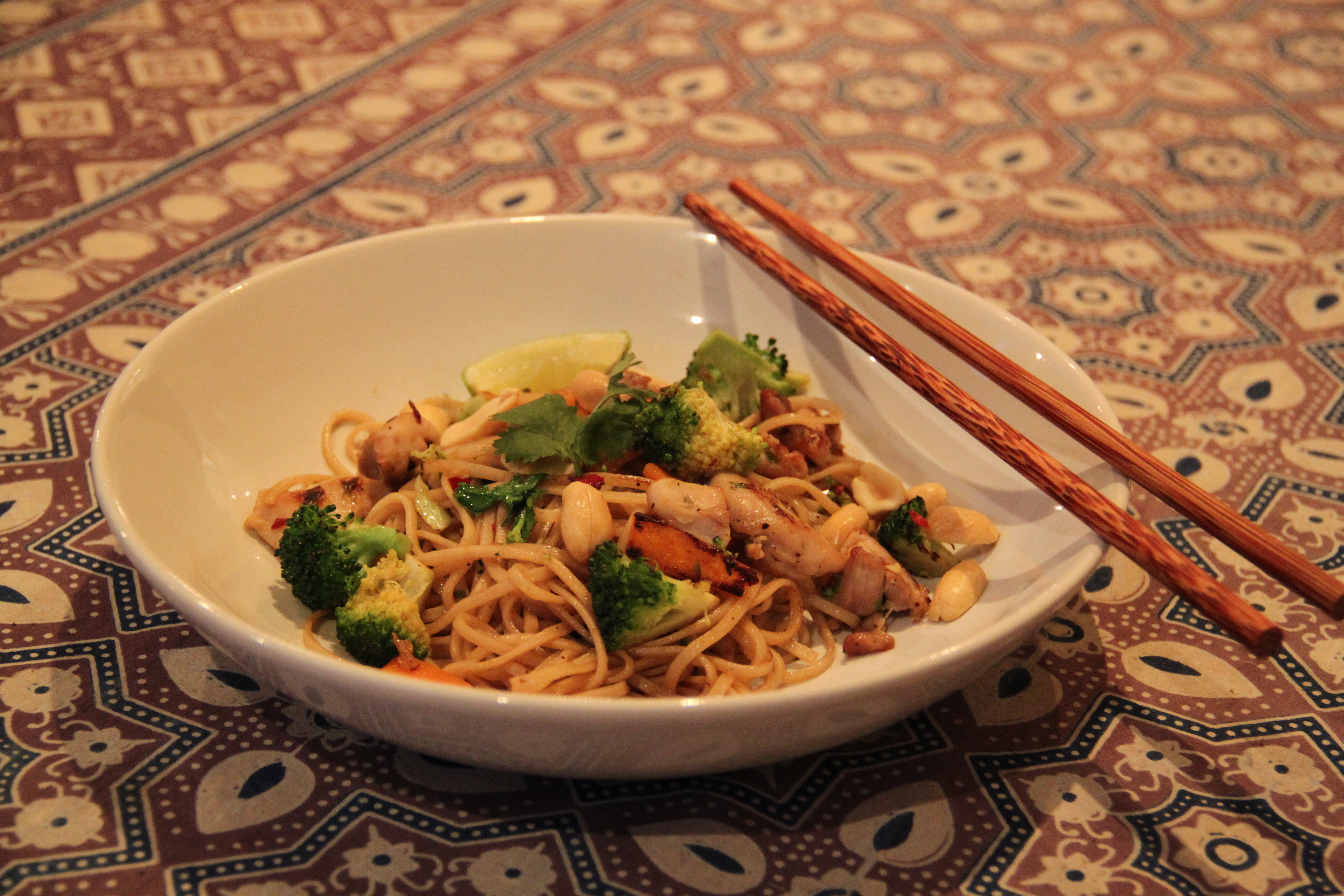 Most people probably already have a go-to chicken noodle or stir fry recipe, but not me. So I looked at one of Jamie’s and then amended it a little (that’s usually how I roll). The result was a nice mixture of soft noodles and chicken, crunchy carrots and peanuts and freshness from lime and coriander. And like most stir-fries, it takes mere minutes to make.

Cook the noodles according to the packet. Rinse and put aside.

Heat up the oil in a wok or large frying pan. Trim the chicken and cut into bite size pieces. Fry them until golden. Add salt and pepper. Then add garlic and chilli to the pan and thereafter spring onions, carrot pieces and broccoli. After a minute or so, add the noodles and heat up.  Add soy and fish sauce, squeeze some lime and season to taste. Top with peanuts and coriander. Serve with lime wedges. 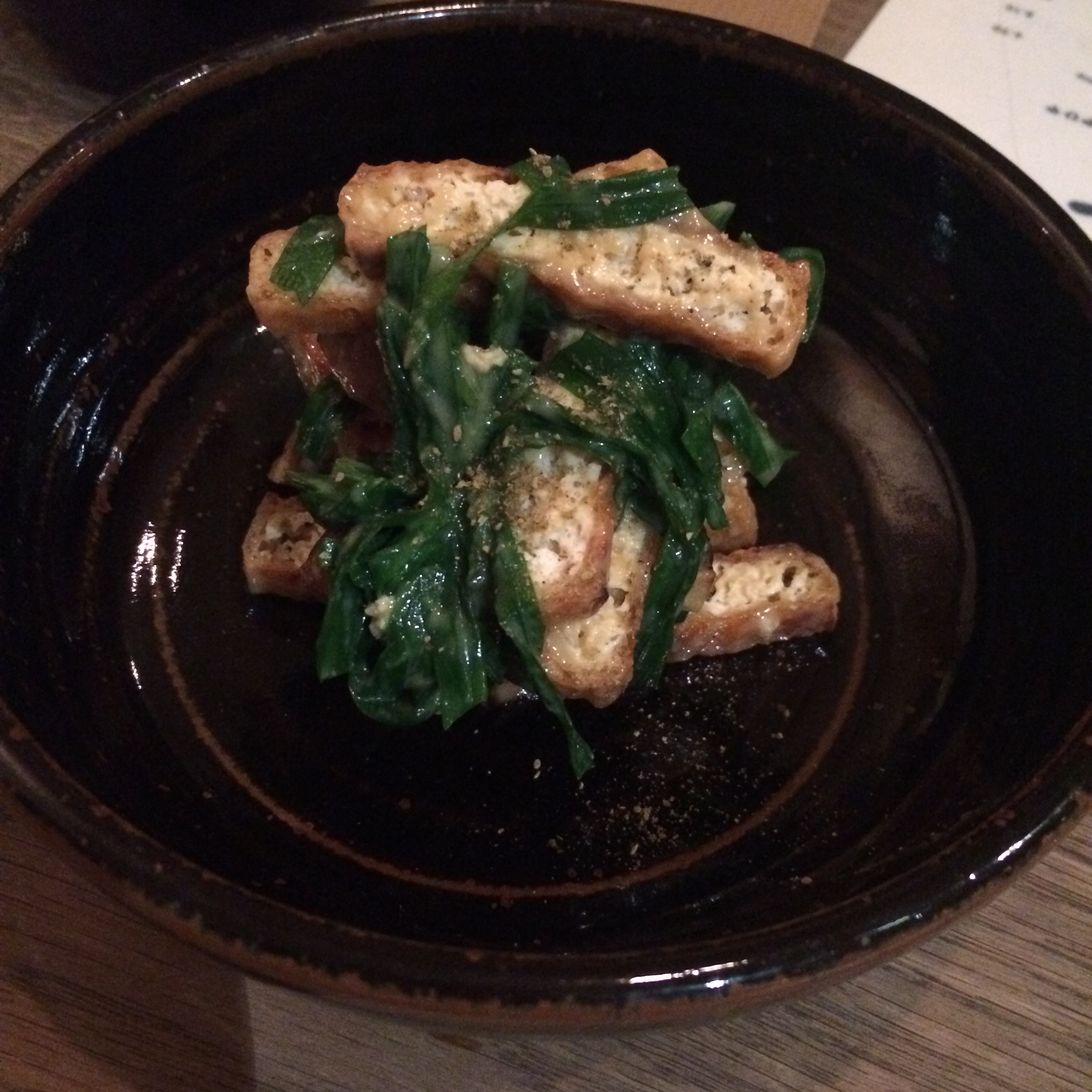 Koya, who recently opened another branch, Koya Bar, just down the streat from its original restaurant on Frith Street, has been around for quite a while but I (finally!) did my first visit a few weeks back. It was a cold cold January evening and me and some friends thought a warming bowl of noodles would make a perfect supper.

We started with a few small plates specials from the board and I must say they varied a bit. The fried tofu (above) was alright I thought, but not being a tofu fan my comments may not do it justice. My friends seemed to enjoy it a lot more! 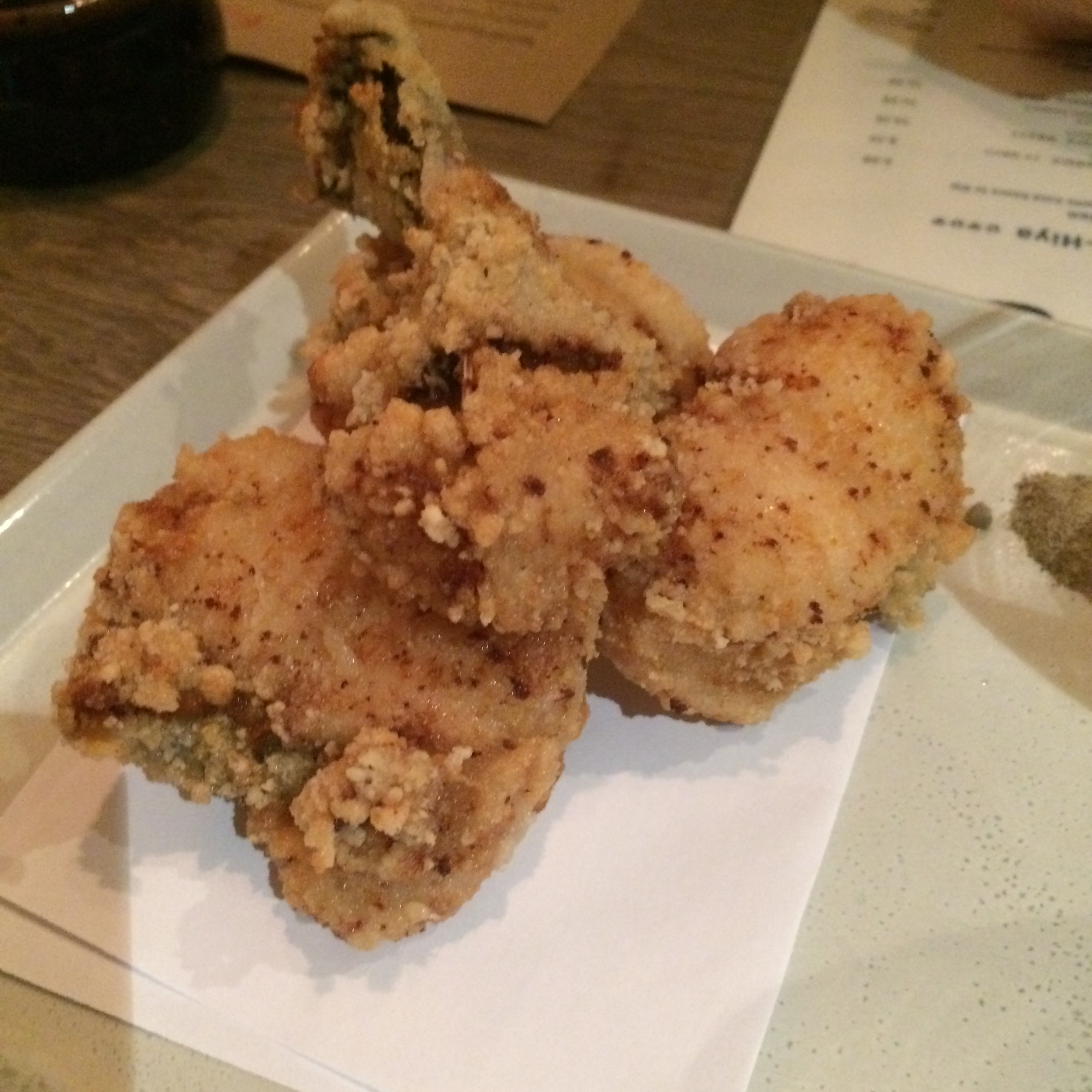 The sword fish came in breaded and fried chunks complete with bones and things. Not my favourite but perfectly OK. 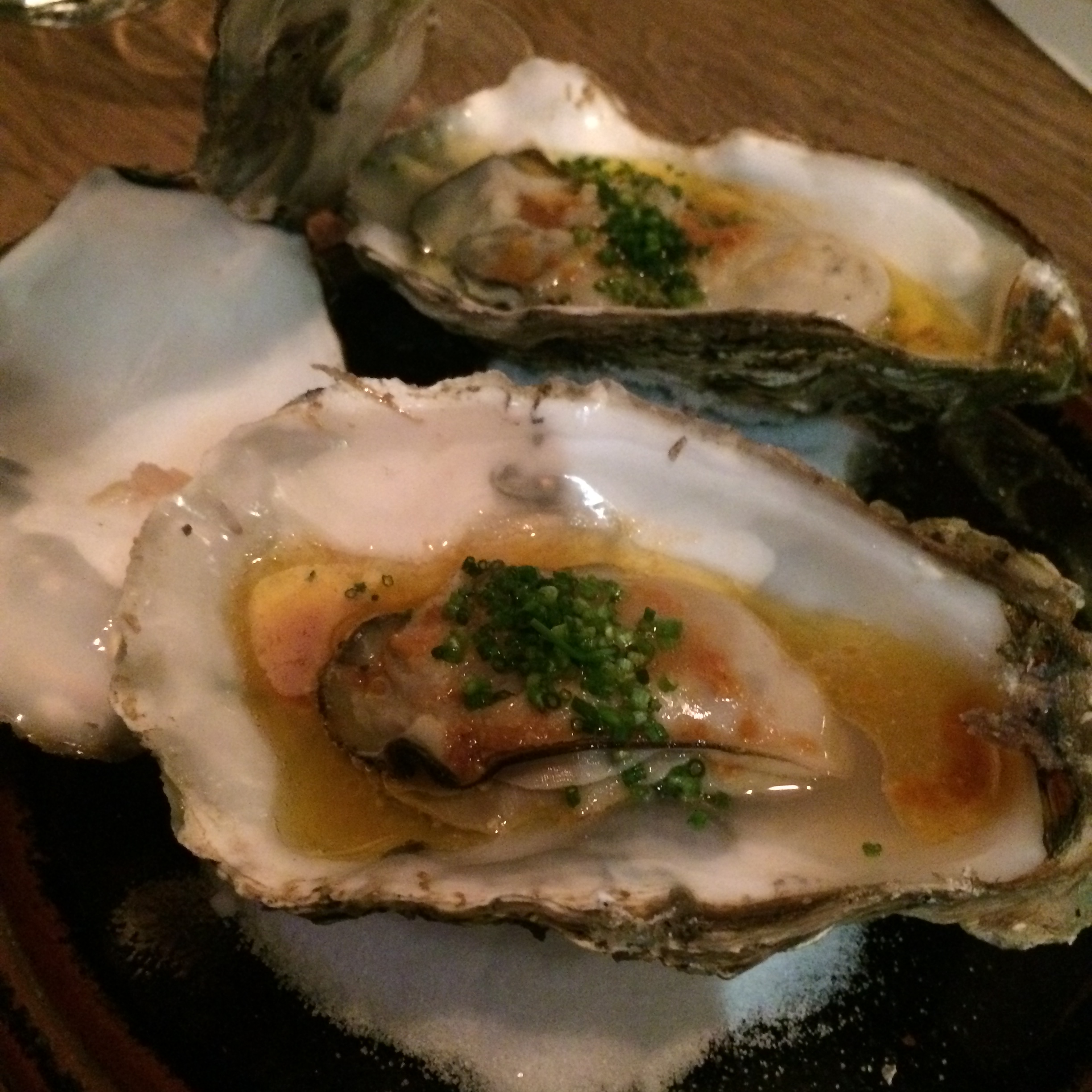 But I really enjoyed the grilled oysters! 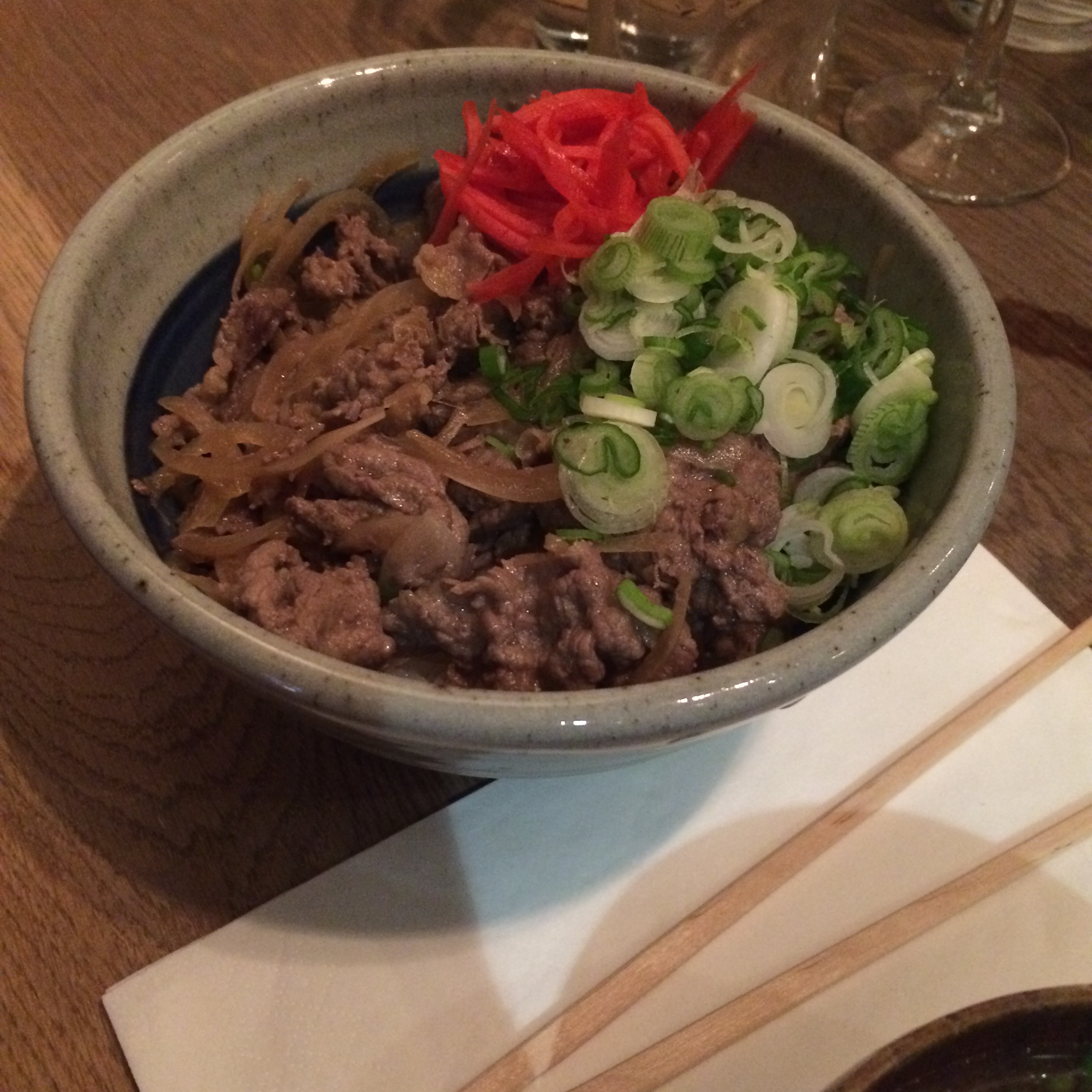 For our mains most of us had noodles, but Jenny chose a domburi (rice bowl) with beef and vegetables that looked really good! 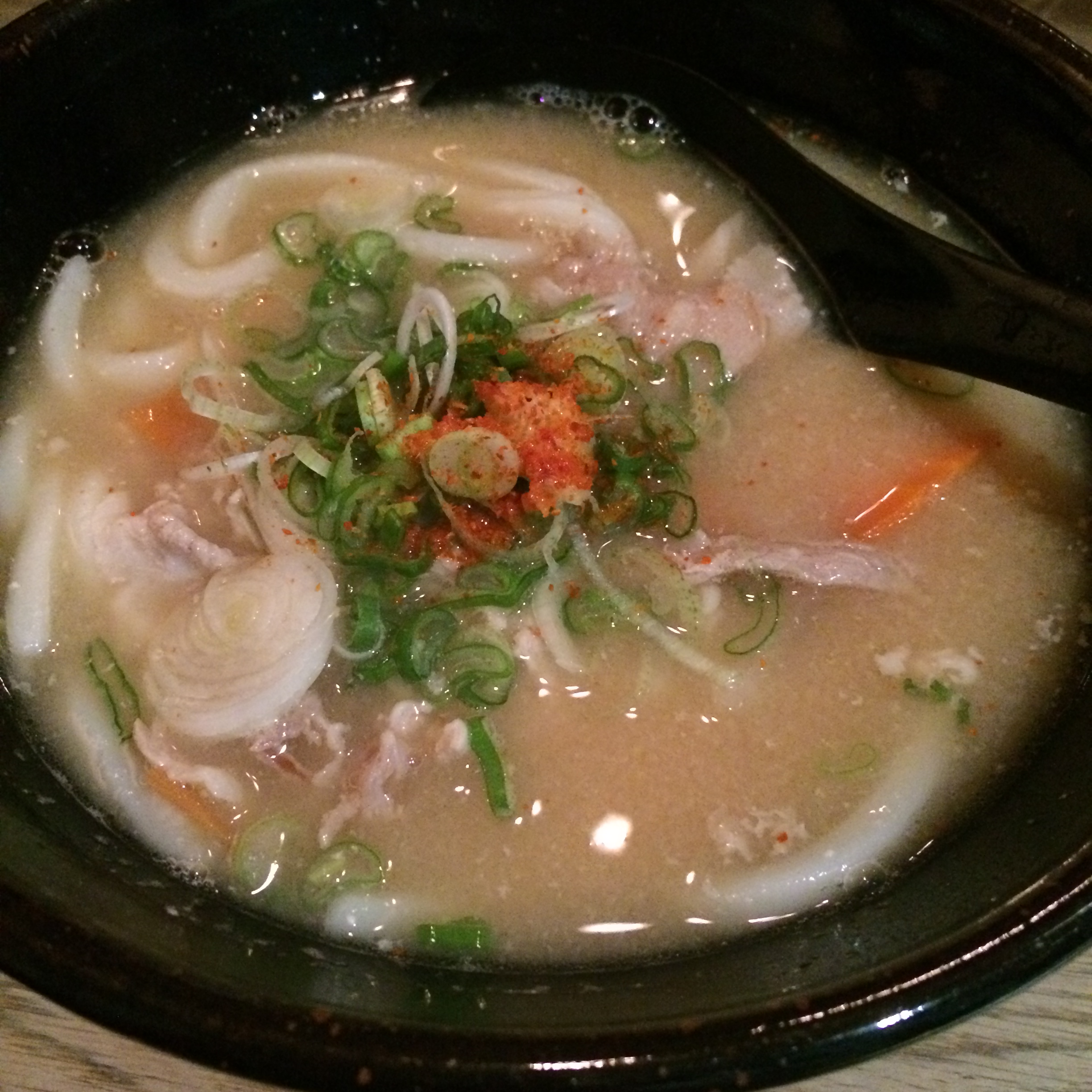 I had a wonderful noodle soup with pork, vegetables and miso. The broth was had great flavour and the udon noodles a nice chewiness to them, the pork itself was probably the least exciting with the dish. It was just what I needed; a soothing and warm bowl of noodle soup! 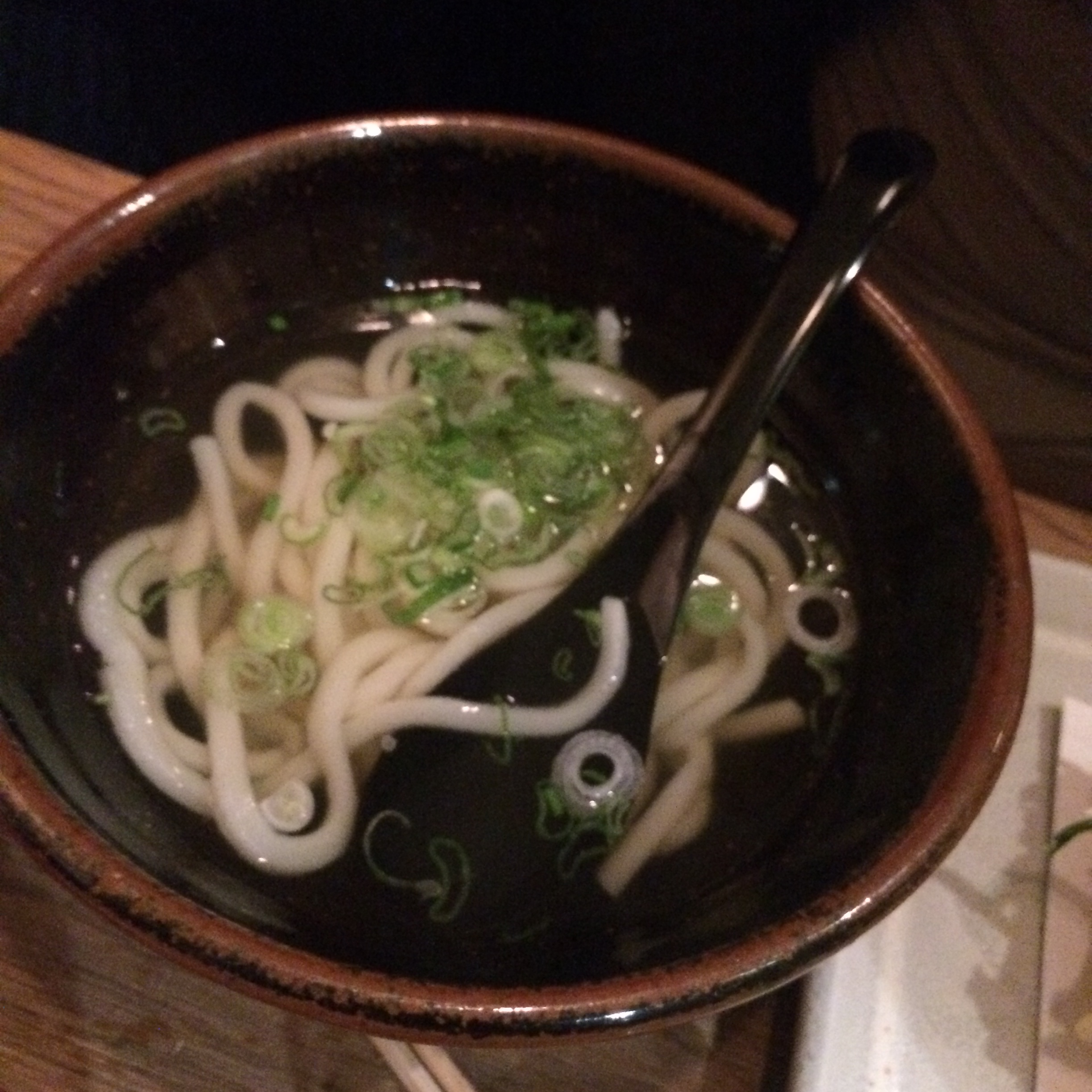 Laura also had a noodle soup, but one of the specials with miso and fried salsify (I think), not in the picture. Unfortunately the photo of Amy’s noodle soup with vegetable tempura came out grainy, but I think you can imagine what it looked like. It was also really nice.

We were very satisfied with our meal (and wine) but it’s not a place where you can linger. As soon as you’ve finished someone wants your table; it’s first come first serve – no bookings. 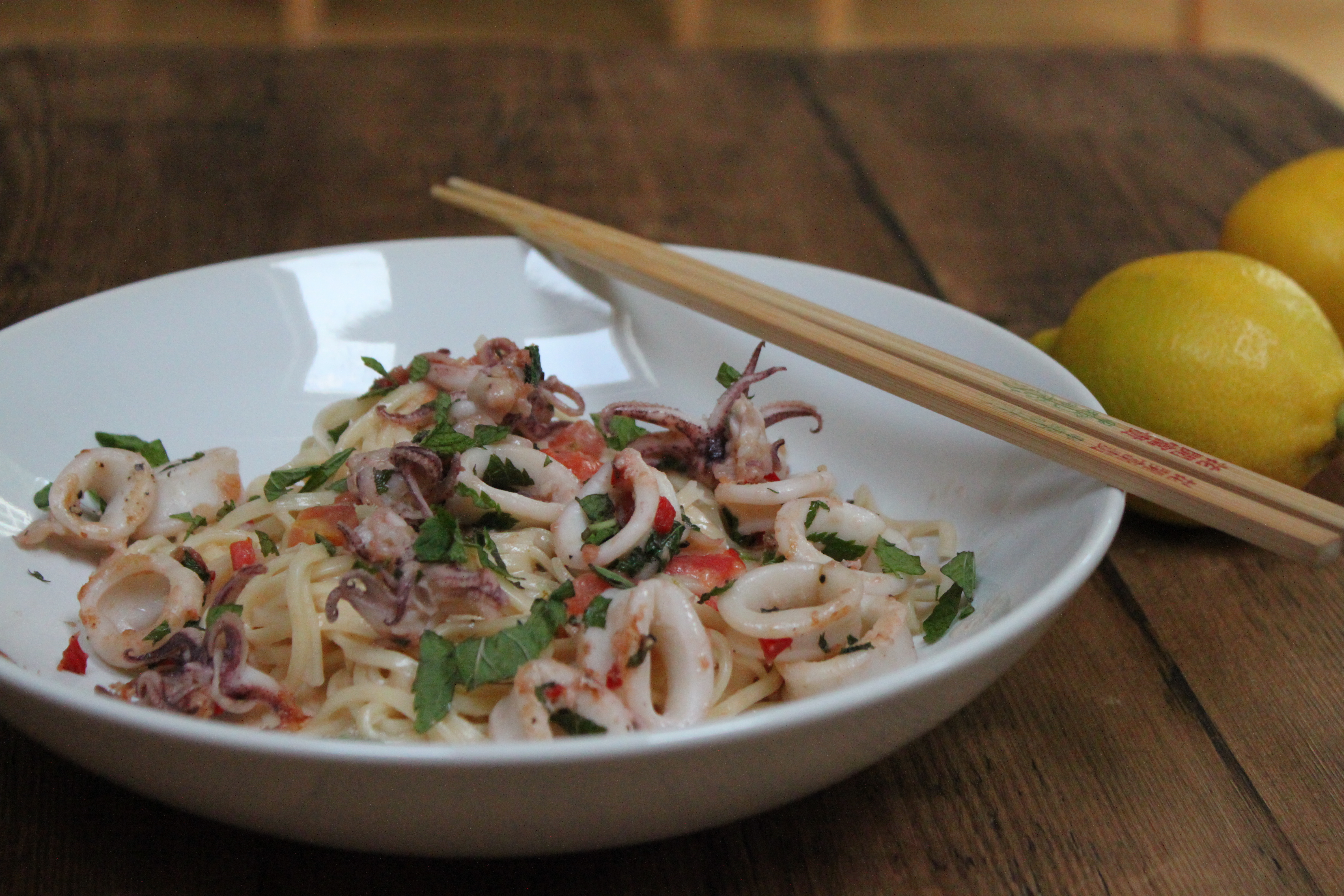 I absolutely adore squid and try to mix my recipes up a little; one can only have so much calamari… This dish with crispy squid with the bold flavours of lime, chilli and mint contrasting the soft noodles in coconut milk is really tasty and one I will make many times in the future.

Cook the noodles according to the packet. Heat up some olive oil in a non-stick pan and add the tomato and chilli. Fry for a few minutes then add the coconut milk and bring to the boil. Season with the zest and juice from 1 lime, salt and pepper. Let the sauce thicken, then mix with the noodles and add some mint.

Heat up olive oil in a frying pan on high heat. Add the chilli and then the squid and flash-fry for 2-3 minutes. Add the garlic and lower the heat (so it doesn’t burn). Add the juice of 1 lime and scatter with mint. Season.

Place the noodles in a bowl and top with the squid. 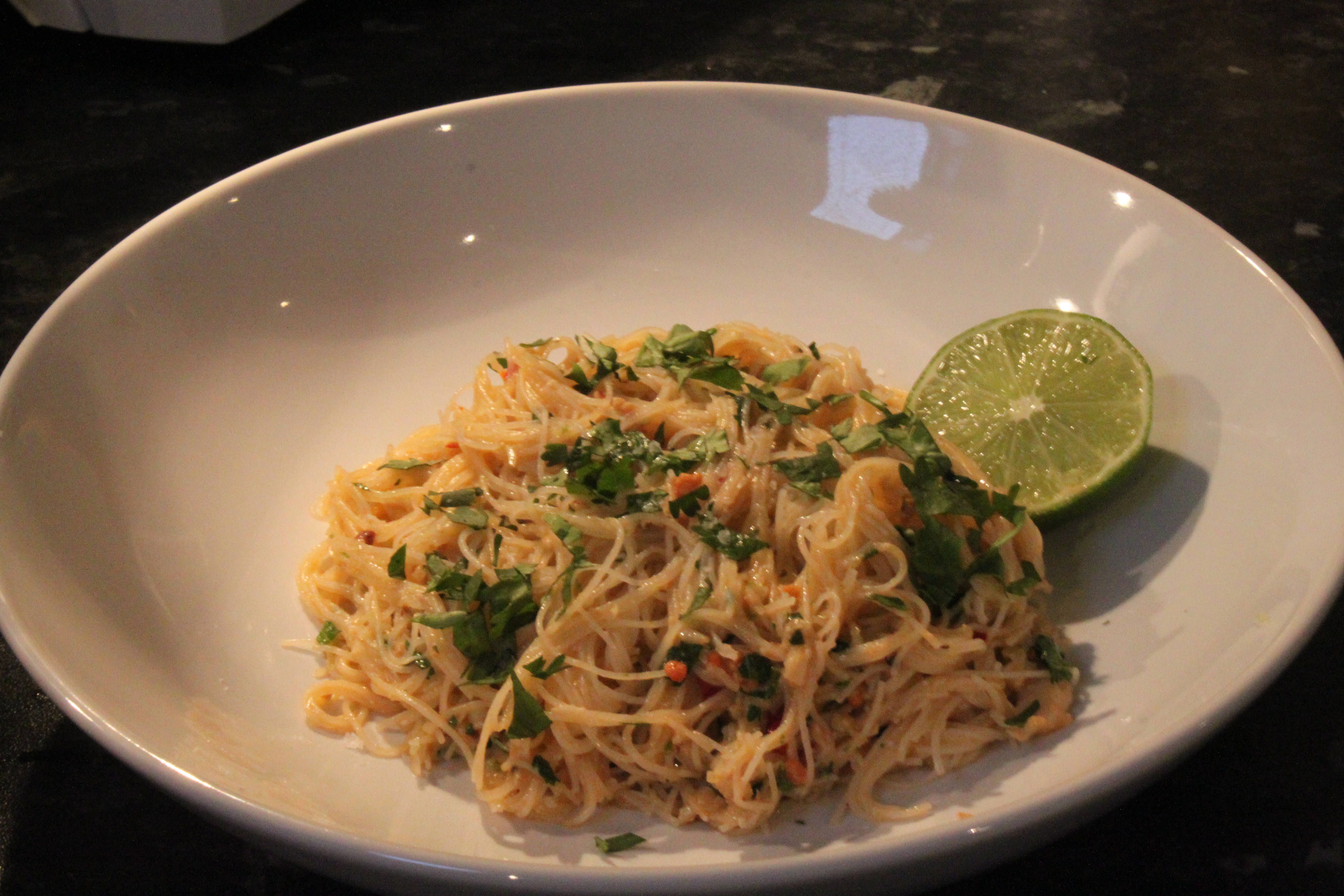 Sometimes I can really crave crab and when I do I find the packets of fresh crab meat in the super market especially handy. Of course a freshly cooked whole crab is nicer but it takes quite a lot of time to pick out the meat, so for a weekday I really like the packets.

This dish with vermicelli rice noodles, crab and butter to carry the flavours of chilli, lime and coriander turned out really well and feels light and fresh. Perfect summer grub if you ask me!

Place the noodles in a bowl and cover with boiling water. Slice the leek and finely chop the chilli. Melt the butter in a frying pan and add leek, chilli and lime zest and fry for a few minutes without browning. Add the coriander and crab meat and stir. Season. Drain the noodles and add to the pan. Turn off the heat, stir and add the lime juice.