At times I get the most peculiar cravings. I guess it ties in with my way of eating; regardless of what it is I eat for pleasure, not just fuel. And most of the time my cravings are a combination of things my body needs and my favourite foods. Typical cravings are usually something with avocado, anything with burrata and sometimes proper comfort food. Often cheese of some kind, and sometimes fish. 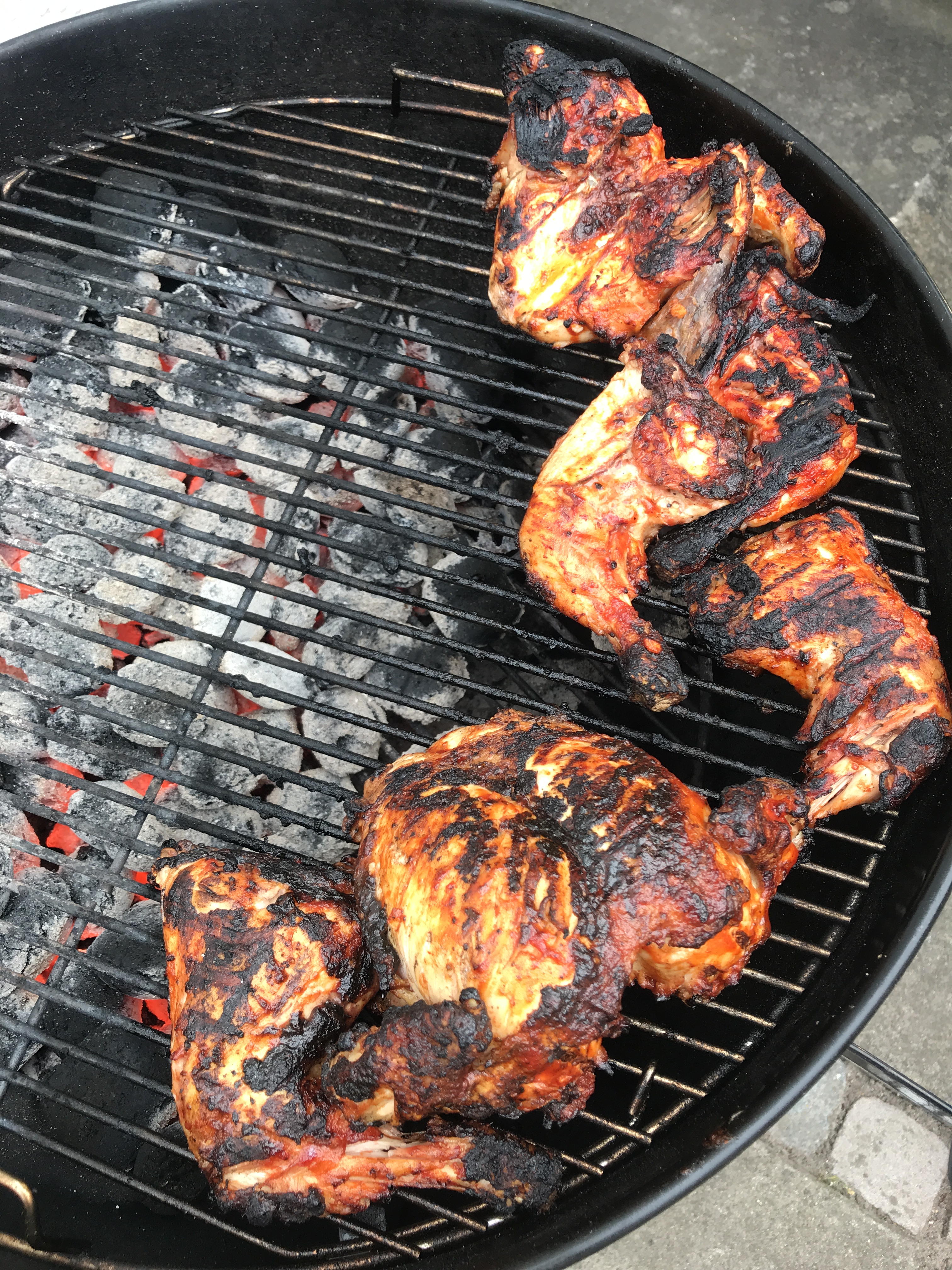 One beautiful summer’s day in Norfolk my body screamed for barbecued chicken. The sticky, charred kind. Maybe I needed protein but whenever I crave something fairly healthy I always try to give my body what it wants.

As we were in Norfolk and had access to a barbecue it was also much easier to make this happen, than if we’d been in London, so I went all in. I threw together a homemade barbecue sauce and marinated the whole spatchcocked chicken in it for a few hours and then got my darling boyfriend to light the barbecue. The coal one, thank you very much, not the gas barbecue!

And apart from the sugars in the marinade burning too quickly it was a great success. We both thoroughly enjoyed the charred and tender chicken, both that night and the leftovers two days later.

But, this almost too charred chicken was not photogenic, and I was also slightly worried about the carcinogenic properties of all that burnt sugar. And decided to perfect the recipe (and reduce the charring) the next time.

And that next time arose a few weeks later in Sweden when my boyfriend was over and we were having dinner with my parents. My foodie family was just as excited about the chicken as I was and my boyfriend loved it last time, so it worked out really well! The trick is to add the barbecue sauce towards the end so it doesn’t burn too much; just that right amount that makes it taste to good! 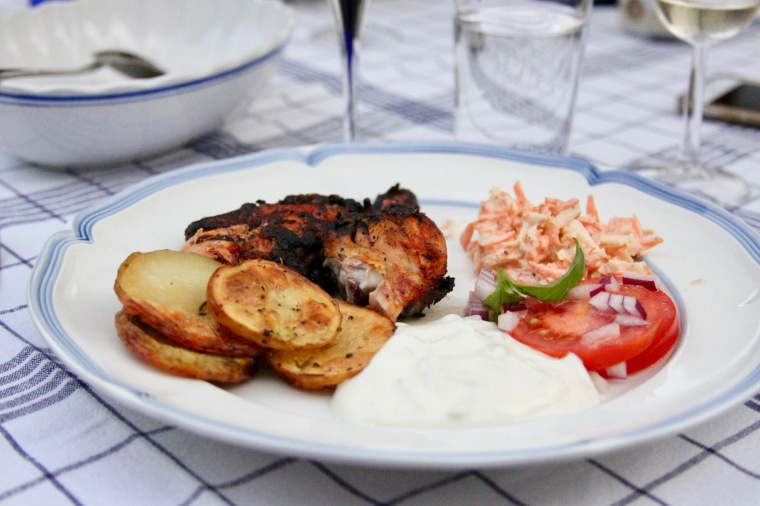 2 smaller (just over a kilo each) whole fresh chickens

Rinse and trim the chickens. (I usually cut away any loose skin and fat, the ends of the wings that is just bone etc.) Then spatchcock the chickens (instructions here) so they cook quicker and more evenly. Season with plenty of salt and pepper all around and brush with oil.

Build up the coal barbecue so that you have the coal and briquettes all on one side of the barbecue, where you have a higher temperature, as opposed to the empty side which still emanates heat but isn’t as hot.

Start off by browning the chickens all around on the direct heat (on top of the coals), for approx 5-10 minutes. Then move them to the indirect heat (empty side) and place them bony side down. Put the lid on and grill for another 15-20 minutes, turning as you go. Brush on a thick layer of barbecue sauce all around the chicken and char the meaty side first (as this is most important to get right) until just enough charring, then turn over and char the other side. The chickens should be ready after another 10 minutes on the grill, but cut through the meat (both the thickest part of the breast and in a joint) to make sure the juices are all clear. Remove from the grill and cover with foil and let rest for 5 minutes. Cut into smaller pieces (our almost fell apart so this was easy) and tuck in!

I came up with this easy chicken dish last week when I was making baked aubergine with tomato and mozzarella for supper; something I could have eaten on it’s own with just a side salad, but as my boyfriend prefers aubergine in moderation I also roasted some potatoes, courgette and peppers in the oven and made this chicken dish. My thought were to echo the cheese and tomato elements in the baked aubergine but using cream instead of cheese. It worked really well and I will definitely serve these together in the future too!

4 chicken thighs (with skin on), washed and trimmed (I like to trim off excess skin and fat)

butter and oil for frying

Fry the chicken thighs skin side down on medium-high heat in butter and oil until golden (approx 5 minutes), then fry the other side for the same amount of time. Add salt and pepper. Add the wine and lower the heat to medium-low. Add cream, tomato paste, soy sauce and the stock cube. Let the sauce thicken while stirring with a wooden spoon. Turn the chicken a few times so it cooks evenly. When the chicken is cooked through (test it with a knife), after aprox 5-10 minutes, add the herbs and season to taste. If the sauce gets too thick, add more cream or a splash of wine and adjust the seasoning.

Sometimes I can really crave nachos. And most of the time I long for the ones I had at Yankee Stadium a few years ago. Although probably really processed the tasted divine!

But the next best thing are definitely homemade ones, and these with chicken and chorizo are absolutely delicious! Also, the secret is in the cheese sauce so although it takes a bit of labour it’s SO worth it!

Nachos with chicken and chorizo, serves 2

Pre-heat the oven to 200C. Fry the chorizo in oil on medium heat until they’re crispy. Add the chicken and let it absorb the chorizo flavoured oil.

Cover the base of an oven-proof dish with a thin layer of tortilla chips, top with cheese, chorizo and chicken. Repeat with another layer. Place in the oven for the cheese to melt, approx 5-10 minutes.

Pour the cheese sauce on top (make this while the nachos are in the oven), guacamole, creme fraîche and the chopped vegetables.

I’m a planner. Not all the time, but I like to plan ahead in several areas of my life. Especially when entertaining. So I had decided on a menu for the lunch I was hosting for a few friends in Sweden long before I even got to Sweden.

But the draught threw a spanner in the works. Three days before I was leaving for Sweden the government issued a BBQ ban in most areas and it was forbidden to barbecue even on your own property. All to prevent any more wild fires. Totally logical and something we all had to accept. But since my original lunch plan involved lighting the barbecue I had to think of something else to cook. I thought this would magically come to me as ideas so often do, but no.

So, in this moment of crisis (well not really, but I was starting to panic a little as my days were packed full of activities) I turned to my trusted cook book collection in the beach house and as usual they helped me out. This time it was a recipe in Nigella’s book Summer that saved me! This slow-roasted lemon and garlic chicken is summery (and delicious) enough to make you forget all about your beloved barbecue and appreciate a dish that basically cooks itself in the oven.

And if you don’t find butchering chickens as therapeutic as I do, I would suggest you either ask your butcher for help or buy a mixture of skin-on chicken breasts and chicken thighs.

Turn up the oven to 200°C and cook the chicken for another 30-45 minutes, by which time the skin on the meat will have turned golden brown and the lemons will have begun to scorch and caramelise at the edges. 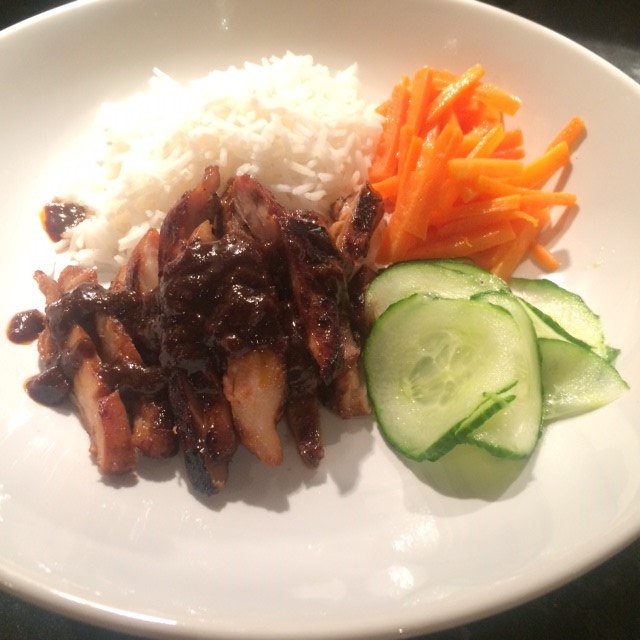 This Korean chicken dish has everything I want from a dish; plenty of flavour, seriously tender meat and a little heat.

The first time I made it I had it with rice, thinly cut carrots and pickled cucumber (using rice vinegar instead). The second time I used to fill steamed buns (recipe to come) and both ways were delicious.

Apart from flattening the chicken this recipe is as easy as making a marinade and forgetting about the chicken until the next day, when it takes a mere 5 minutes to cook it.

The recipe is courtesy of David Leibovitz via Koreatown: A Cookbook.

2 tsp sesame seeds (I omitted these)

Cover a plastic chopping board with cling. Place a chicken thigh fillet (or two) on top. Cover with cling and flatten it by bashing it gently with a rolling pin. Repeat with all the chicken.

Add the chicken to the marinade in the ziplock bag, squeeze the air out of the bag and seal it. Place it in the fridge overnight.

Grill or fry for approx five minutes of medium-high heat. Brush with extra marinade while cooking. Slice thinly and serve. 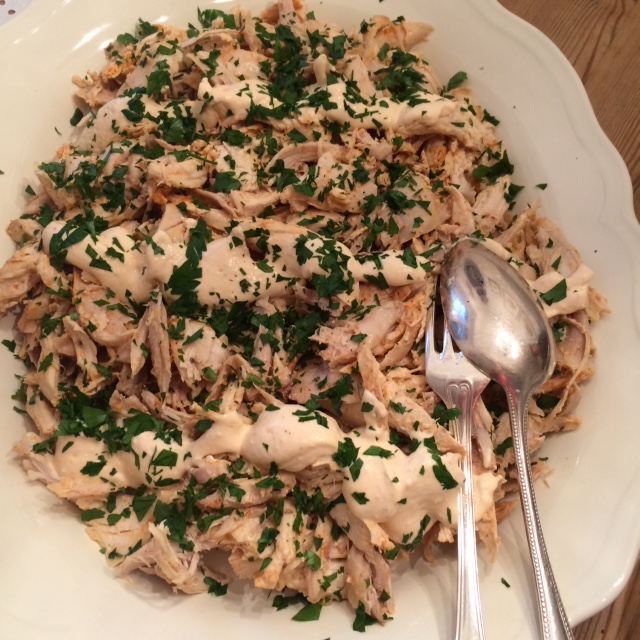 This slow-cooked chicken dish with a little heat went down a storm among some of my Swedish friends. And I do agree, it’s really yummy! Plus it’s served cold so perfect to prep ahead of a dinner, picnic or luncheon.

plenty of salt and pepper

Rinse and trim the chicken. Mix harissa, oil and spices. Season the chickens properly on all sides. Add the harissa mixture to the skin of the chickens and massage it in. Place in cooking bags or in a roasting tray covered with parchment paper (to keep the moisture in). Place in 150C oven for two hours. Leave to cool.

Once the chickens are cool enough to handle (or completely cool if you prefer), separate the meet from the skin and bones and pull larger pieces into smaller ones (like pulled pork).

Mix all the ingredients for the harissa yoghurt and mix 2 tbsp into the chicken meat. You don’t want it wet just the added flavours. If you prefer more of a kick to the meat add some more harissa paste and mix it in. Season to taste with sale and pepper.

Serve on a large plate with some harissa yoghurt drizzled over. Add some chopped parsley for colour. 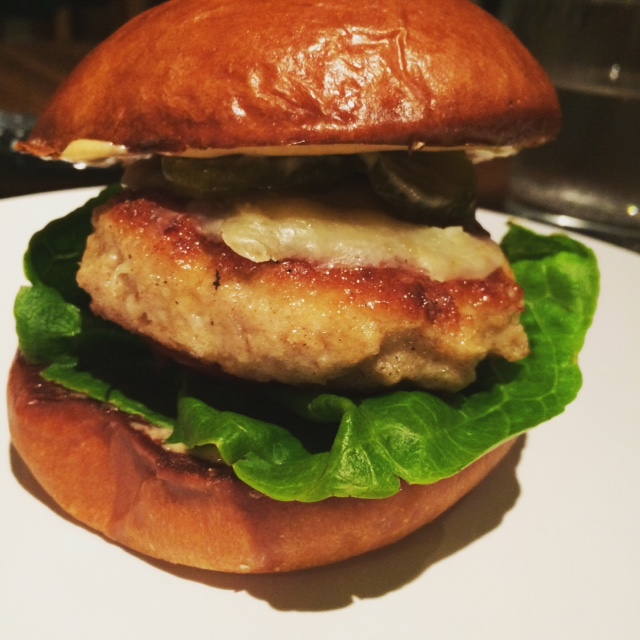 Whenever I have the choice of a regular beef burger or a chicken burger I always, always choose the beef version. Because most chicken burgers are either something covered in breadcrumbs and deep-fried or a whole (often dry) grilled chicken breast. No thanks.

But this homemade chicken burger, made of minced chicken thighs is a real treat. It has a similar texture to a regular beef burger, but feels so much lighter. I melted cheddar on top, served it with lettuce, sliced tomato, pickles, nice buns (I used Heston for Waitrose burger brioche buns and they were very good!), and a good helping of my favourite burger sauce; the fake shack sauce ,and it was pure happiness. Will definitely make this again!

Mince the chicken thigh fillets in a food processor. Mix egg, spices and breadcrumbs in a mixing bowl and leave to swell for a few minutes. Add the chicken mince. If the mixture is too loose, add more bread crumbs until you can shape the mixture into two big burgers. Fry in butter until cooked through and serve.