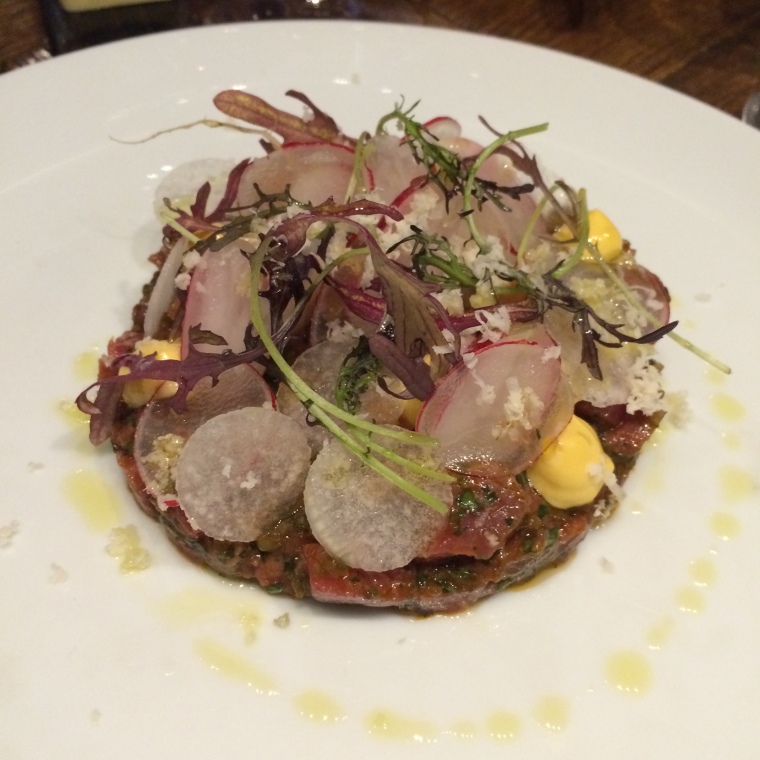 Jason Atherton has been busy opening restaurants the last few years with the additions of City Social, Little Social and Social Eating House to his earlier established Pollen Street Social.

Out of the new editions I have only been to Little Social, but a few weeks ago I went to Social Eating House in Soho for dinner with a friend from home I haven’t seen in ages. It was so much fun and since we’re both foodies we thoroughly enjoyed the food as well!

Both starters were amazing! My smoked Angus steak tartare (above) was to die for. Lovely flavours, amazing meat and loved the toppings that added different textures. Oh and the egg cream was delicious too! 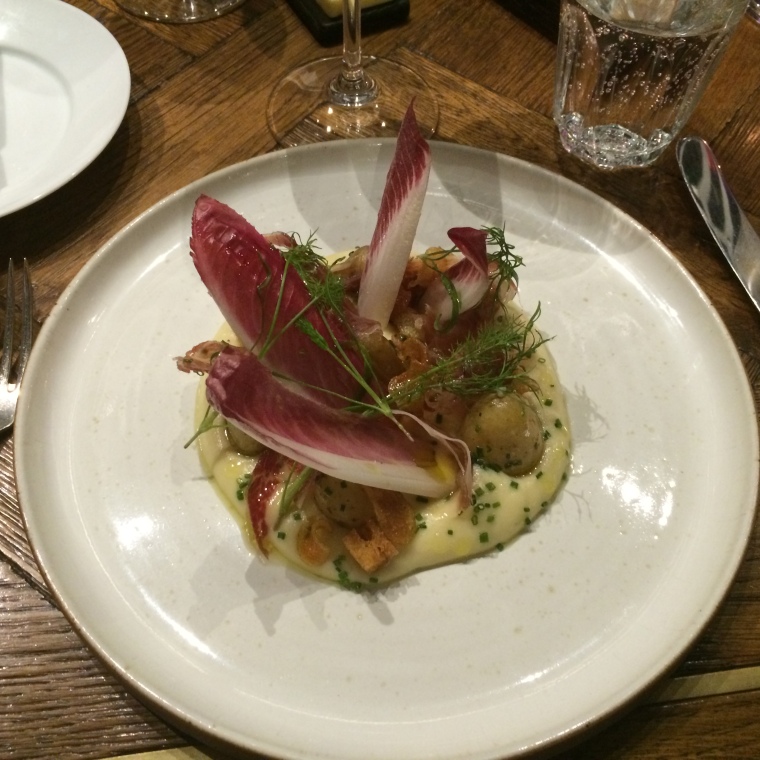 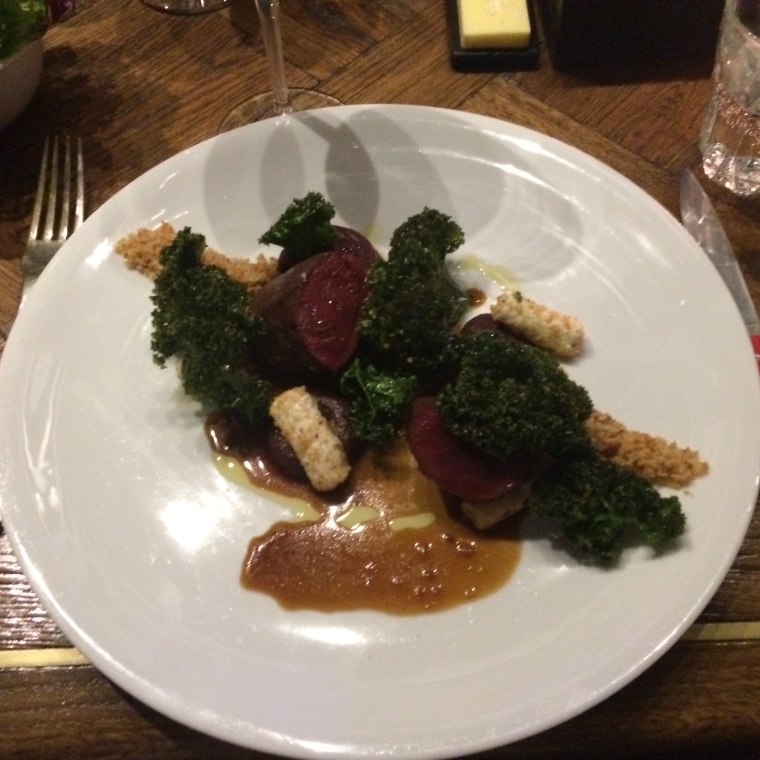 The main courses were also really nice. This slowcooked venison with date jam, kale, brazil nuts and goat’s cheese was delicious but the lamb was even better. V 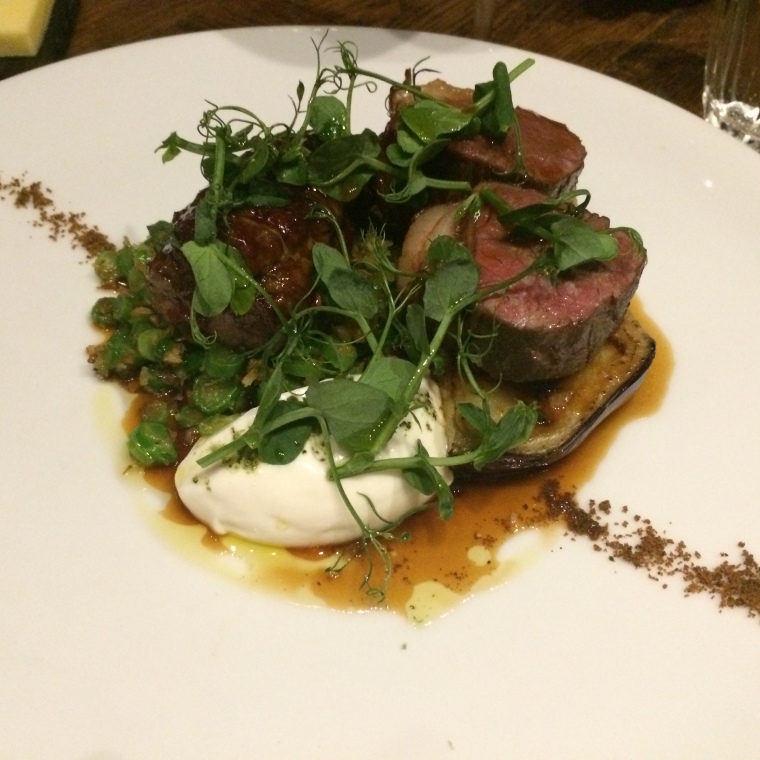 The lamb loin from Kent with neck confit, miso caramel, aubergine and mint yoghurt was pure perfection! Especially the confit was to die for and the whole combination of flavours was spot on! 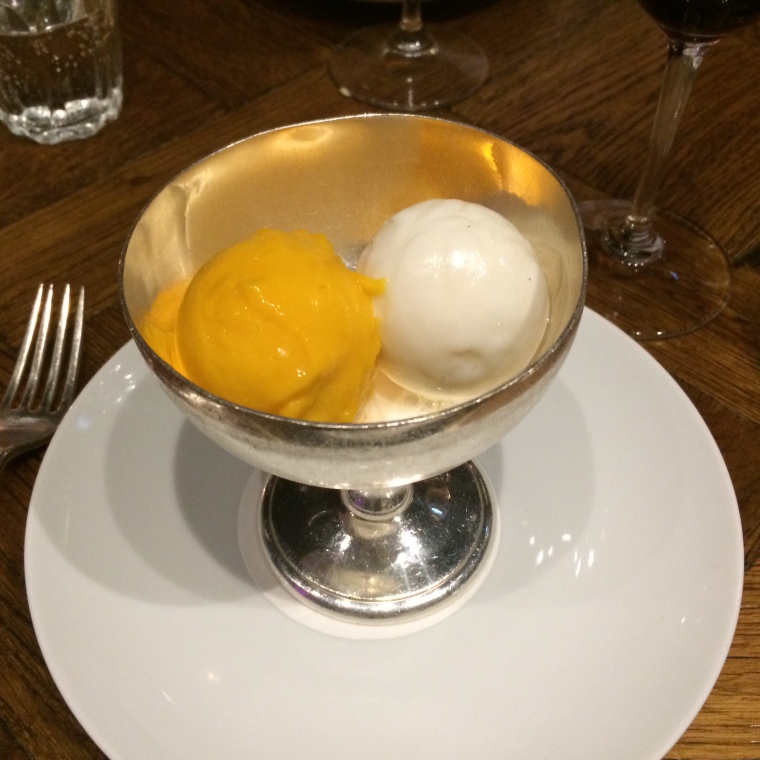 We were too full for a proper pudding (the portions here were certainly substantial) but we couldn’t resist some sorbets and icecreams. Mattias had the coconut (which tasted a bit like Malibu) and mixed berry, which was really nice. The mango sorbet I had was really good and the yoghurt icecream was nice too.

I’m a big fan of chef Atherton and his restaurants. Both I’ve been too have a very high standard of both food, wine and service. The ambiance is nice and relaxed too which is a plus. It’s just very well done. All of it.

I’m really into duck and goose fat at the moment, perhaps because it is the season for roast potatoes again.

If you want to make the most wonderful roast potatoes, you need this type of fat. Vegetable oil just doesn’t cut it, both the taste and the texture is different. I mean when my British boyfriend’s British mother compliments my roast potatoes, I know I have done it right. 😉

But it can be even better than that, with goose fat flavoured with cepe mushrooms (also called porcini). You achieve this by making a confit and then saving the fat.

But the mushrooms are nice too, although I must admit I made this more for the idea of the roast potatoes. Served on toast with some parmesan, this is a real treat.

Place the mushroom slices in a glass dish and cover with the goose dat. Place in 85C oven for ,5 hours. Leave to cool. Drain away the fat and keep it and cherish it. Place the mushrooms on a plate and put in the fridge.

Later fry the mushrooms brown and crunchy in some olive oil. Place on buttered toast and add parmesan shavings and some parsley if you have. Enjoy!

Unusual cuts of meat have been popular for a while, probably a lot thanks to Fergus Henderson, and it is almost comical that we now pay lots of money for what used to be peasant food for our grandparent’s generation.

To me it seems like the general public only eat chicken breats, salmon fillets and beef mince. There are so much more to fish, meat and poultry than that, and as much as I enjoy different cuts for the variety I also like to buy them because they are a lot cheaper than i.e. chicken breasts.

Fresh food is expensive, but with cheaper, unusal cuts of meat you can get a wonderful tasting meal if you just learn how to cook them. Most unusual cuts are tougher but full of flavour and therefore need a slowcooking approach.

My paternal grandmother for example, cooked and ate pig’s trotters quite a lot, because it was cheap and tasty. Now I eat pig’s trotters in Michelin starred restaurants, which is nice, but a bit twisted, you must admit.

One increasingly popular cheap cut of pork is the cheeks, and I bought some in Waitrose for £2.99 a kilo. I used google to do some research on how to best cook them and found that the most common way was a confit. 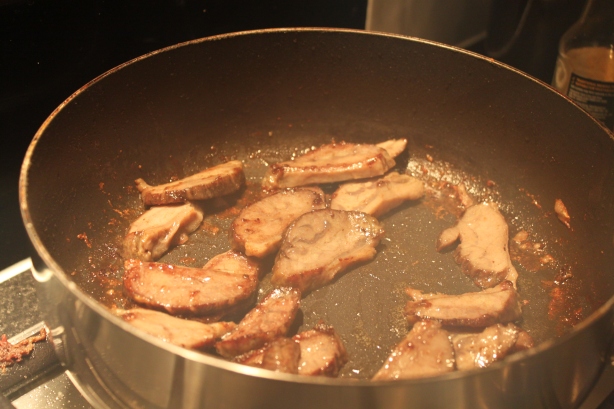 The day before I made the confit, then refridgerated the pork cheeks over night, sliced them in thin slices the next day and fried them until crispy. Together with roasted vegetables and potatoes and a sauce with sage and garlic, this was a delicious yet cheap meal for two.

The pork cheeks were absolutely lovely and I will definitely cook it again soon. At the dinner table we started thinking about how else to serve it. Maybe as a starter with a salad, or with a mushroom creme, or perhaps in an indulgent sandwich? The sky is the limit! 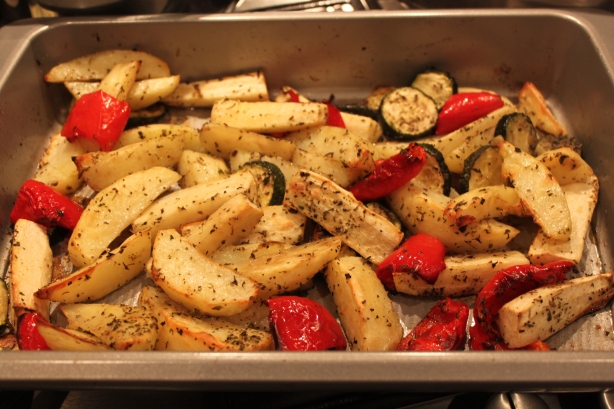 butter and olive oil for frying

Place the cheeks in an ovenproof dish and cover with the fat. Place in 125C oven for 2-3 hours until the meat has browned and is tender. Take the meat out of the tray and place on a plate. Refrigerate.

Peel the potatoes and parsnip and cut into wedges. Place in a roasting tray. Slice the courgette, cut the peppers into large(ish) pieces and place in the tray. Add olive oil and Italian herbs, salt and pepper. Bake in 200C for 30-40 mins, stirring occasionally.

When the vegetables are almost cooked, start making the sauce. Heat up some olive oil in a non-stick sauce pan, on medium heat. Fry the sage and garlic for a minute or so. Add cream, creme fraiche, mustard, chilli sauce and soy. Bring to the boil and season to taste with salt and pepper and stock. Colour the sauce light brown and let it thicken.

Slice the cold cheeks into 2-3 mm thick slices. Heat up butter and olive oil on high heat in a frying pan and fry the slices until crispy. Serve with the sauce and vegetables and marvel over how wonderful this is.