Since it opened some time last year, Colbert has been on my very long lists of restaurants to try.

I have always loved The Wolseley, not just the food, but the whole atmosphere, the excellent service and the grand interior.

I expected Colbert to be similar, and it is in many ways, but there is one major difference – the grandness. It is just not as palpable at Colbert. The restaurant is smaller and the lower ceiling height makes it feel cozy but not very grand. But the air of a forgotten time is still there with the impeccable china (so pretty!), linen napkins and silver cutlery.

It is also more relaxed, which is intentional I am sure, with a few tables outside for passers-by or for a quick cigarette before going back in. 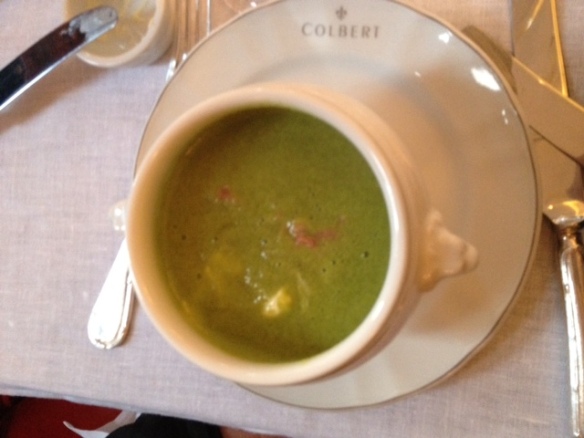 But enough about the ambiance, how was the food?

It got mixed reviews from us. Us being mother, father and I.

Mother chose the soup du jour as her starter; a green pea soup with smoked ham and creme fraiche. It was tasty, but not amazing. 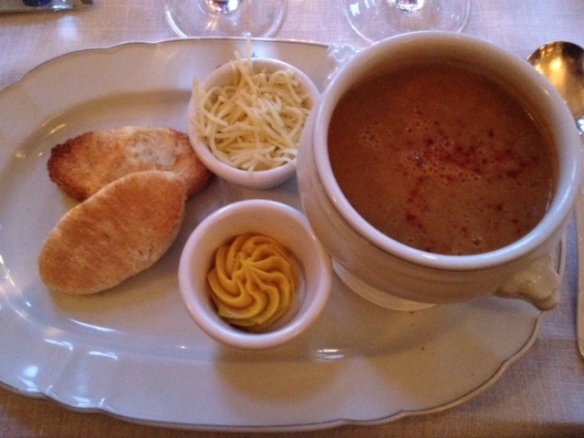 Daddy also chose a soup (it was a cold day); fish soup with croutons and rouille. We (I had the same dish as my starter) expected pieces of fish in the soup but instead the soup was smooth. It had a nice flavour, but because of its texture and the lack of fish pieces it was a bit boring to eat. The croutins were nice and crispy but the rouille didn’t taste of much until a hint of heat hit you at the end. All in all it was a decent soup, but far from amazing.

But my starter was, however, amazing. I received a giant slice of the smoothest chicken liver parfait I’ve tasted, framed with butter. Stunning (see top photo). The flavours were fantastic, the texture perfectly smooth and the little jewels of sauternes jelly added both acidity and some sweetness. It also came with toasted brioche which was soft and buttery without being too rich.

Daddy settled for the Minute Steak for his main course, like me he likes his meat. This steak was a sirloin, cooked perfectly and with plenty of smoky flavours from the grill. It came with a herb butter, crispy frites (they were really good actually) and a side salad. 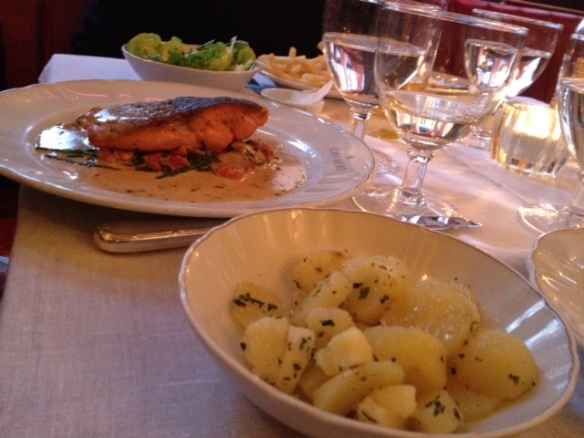 But mummy’s maincourse was the best of them. I so wish I had ordered the same. Her trout was cooked really well and served with samphire, fried mushrooms and the most amazing creamy sauce it was a real treat. She had some new potatoes on the side which was the perfect pairing.

We actually, I don’t know how, had room for pudding. Dad chose a classic creme caramel that I helped him finish and it was really good, up there with mummy’s homemade one.

Mummy, who chose the daily specials all the way through her meal, was tempted byt the pear and almond tarte, that I also helped her with. It was lovely, just very rich.

Despite the mixed quality of the food, everything was good. We are just an especially picky bunch, and the food we really enjoyed was very very good. I like the relaxed atmosphere and the, for me convenient location, and will definitely be back. But I think I will skip the fish soup next time.

One thought on “Dinner at Colbert, Chelsea”