The world’s sixth and eight best restaurants right now, are both located in San Sebastian in the north-east of Spain. On my visit to the region on the bank holiday in August my friend Caroline (as keen on nice restaurants as I am), we had a fabulous lunch at one of them; Mugaritz. We would have loved to go to Arzak too, but we’ll save that for next time.

We more or less went straight from Bilbao airport, via the hotel, to the restaurant and as soon as we were seated at our table we were shown into the kitchen (amazing) where we also got to eat our first course.

It was a marshmallow made with pig’s blood. The very charismatic chef told us that pig’s blood has the similar properties to egg whites and can also thicken and be used for meringues and marshmallows. This marshmallow was flavoured with onions, pine nuts and black pepper and it was really good. And interesting.

One we got back to our table we had wine and water and also got a warm wet towel to have at hand as the first couple section of dishes should be eaten using only our hands.

The blue cheese round with anchovies (left) was actually a bit tame in flavour, I would have preferred a stronger flavour from both the cheese and the anchovies. The mussel with parmesan which was also lightly smoked was spot on though; so delicious. 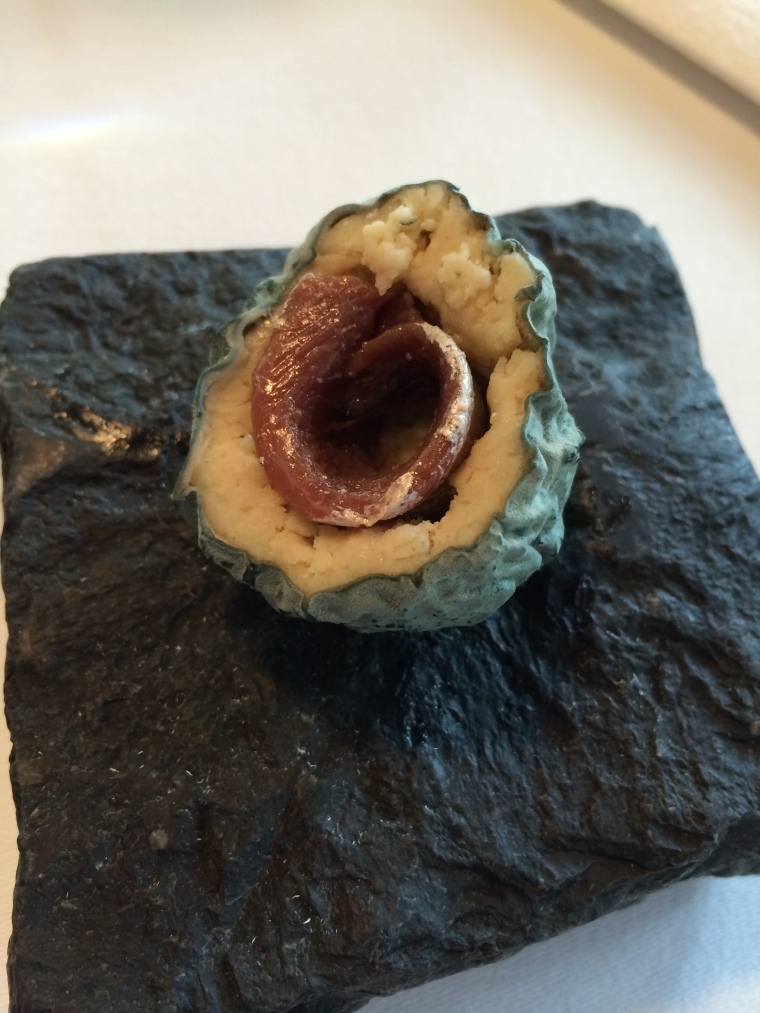 Next up we had tendons. Not sure if it was from pork or beef, we realised quickly that the amount of information given about each course depended on the waiter. Some were confident in explaining it to us in detail in English were as some only sad a word or two. This was more interesting than tasty, fun texture though, much softer than I expected.

After that we were put to work. All the guests (about 40 per sitting) received a pestle and mortar at the same time and got to work their arm muscles turning the corn into a paste.

We were then given a square of jelly with herbs and flours that melted in the warm mortar and turned the rough paste into a smoother one. We then had a delicious dip to either eat with a spoon or dip the bread in. 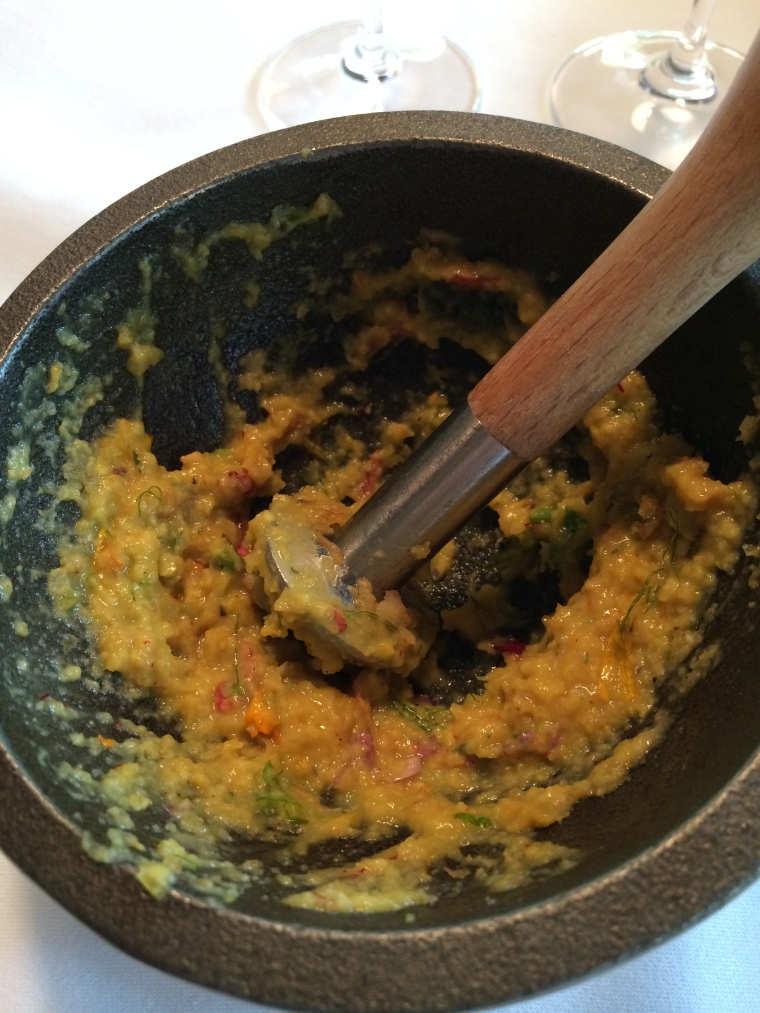 It was fun to participate in something and the smell was amazing, just like the finished dip. It had several dimensions with different textures and lots of subtle flavours all coming together.

Next up was duck neck, cleverly illustrated by the special plate. It was crisp, a little sticky and very tasty.

We then had Chinese chives tempura with what I guess was a chickpea puré. Also very nice.

The eighth course was a soft soft dumpling topped with crispy Iberico pig skin and a chutney. I loved the difference in texture and the flavours were great. 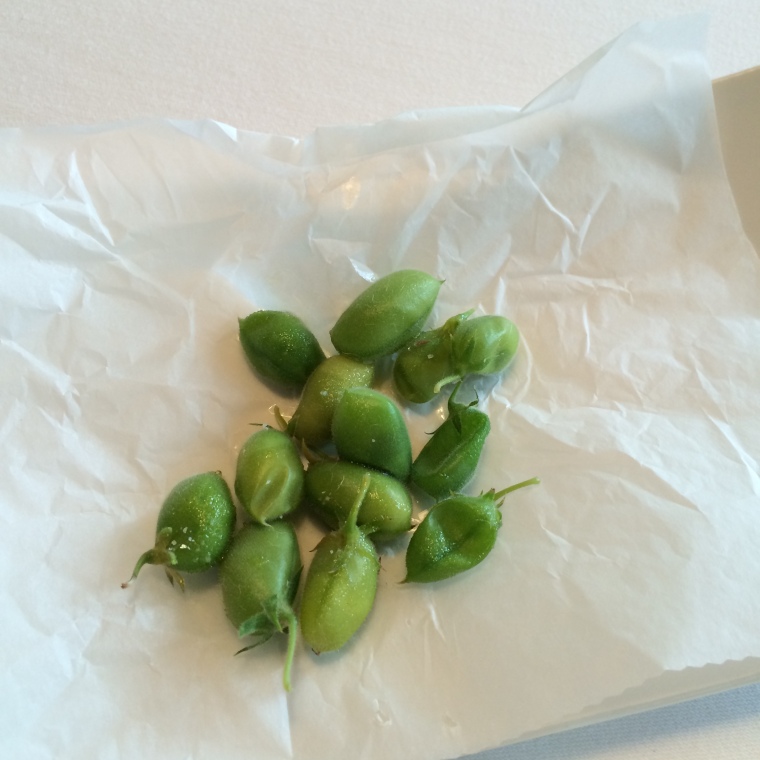 Having finished a third of the menu we got a palate cleanser consisting of fresh chickpeas in their shells with sea salt and olive oil. Very fresh and light!

Next palate cleanser was very far from a sorbet, instead we had mud and dirt. The mud was made from pine nuts though and we got to dip this moss looking plant called deff in it. I especially liked the plant, which was very fresh and subtly fragrant on its own. 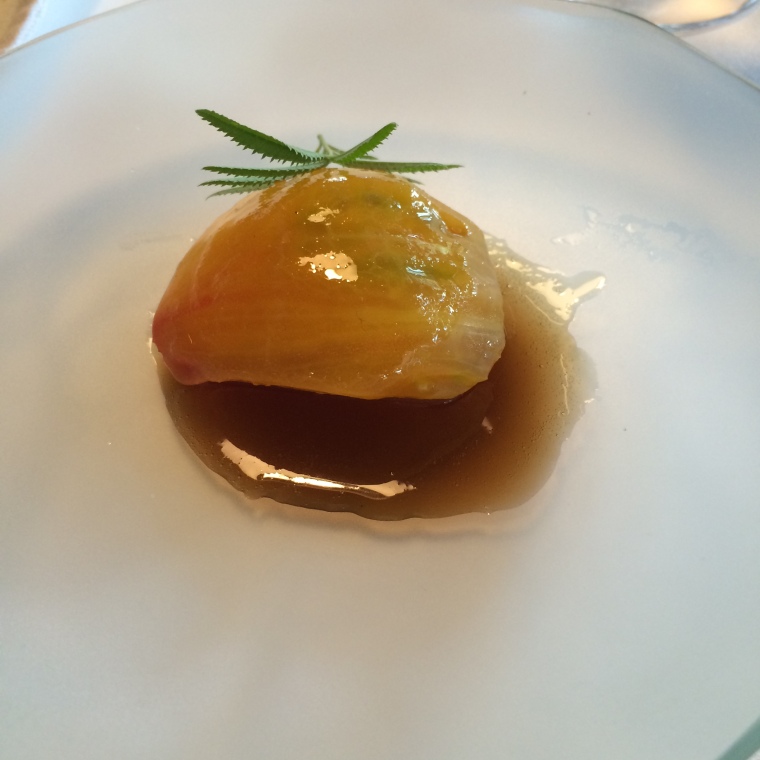 After the mud course we got proper cutlery and the first maincourse; tomato in a gelatinous broth. It was incredible! The tomato was quite firm but soft at the same time and the broth was very intense in flavour. 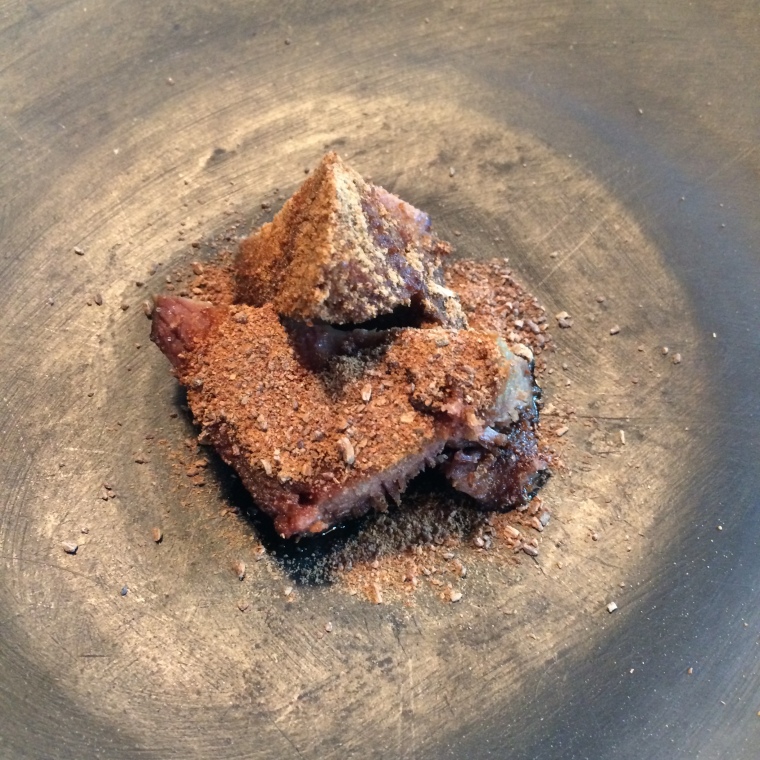 The ox cheeks with powdered sauerkraut were also very good The powder was interesting, while it tasted like sauerkraut the texture made the flavour dissolve quickly.

In the middle of the main courses we got to play a game with plastic knuckles. The winner received a little plate of caviar and I am very grateful Caroline wanted to share her winnings with me. 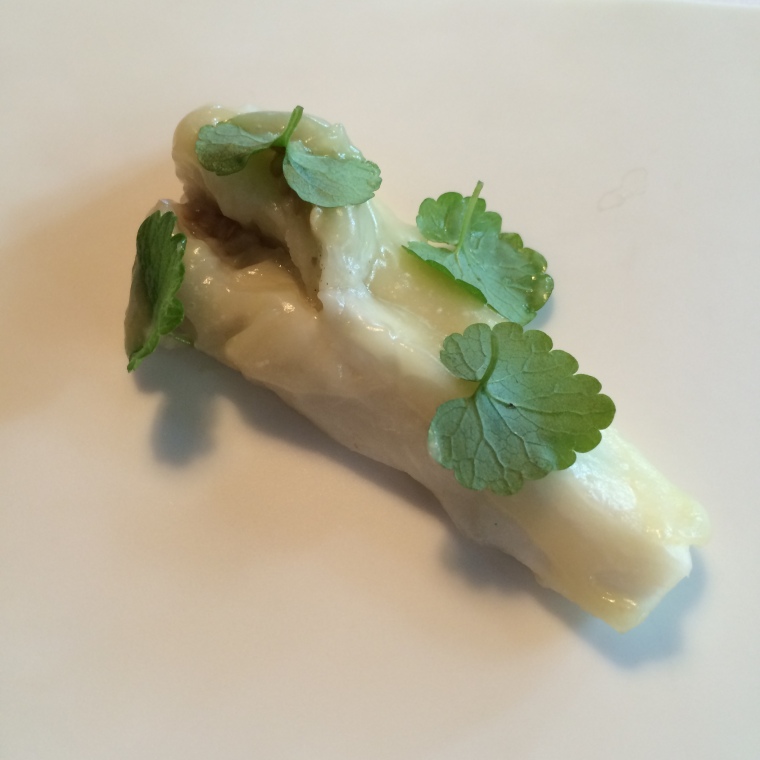 Poached aubergine with white miso was more interesting than tasty, The texture of the aubergine was phenomenal; form but soft, but the miso was a bit too sweet and the herb on top very pungent and sharp and actually not very nice. Does anyone know what the herb is called?

The hake with milk pearls melted in the mouth and was fantastic. Very subtle in flavour (I actually couldn’t taste the white asparagus) and the fish was cooked to absolute perfection. A joy to eat.

This dish doesn’t look very appetizing but it was a fun take on surf and turf. Underneath the crisp chicken skin was a catalan cream with lobster. Like a savoury creme brulée – love it.

The next course was just amazing! It was definitely the best steak tartar I’ve ever tasted. The meat was incredibly soft and tender, the caviar was a fun (and delicious) contrast and the pickled mini onions added the perfect amount of acidity. Perfection! 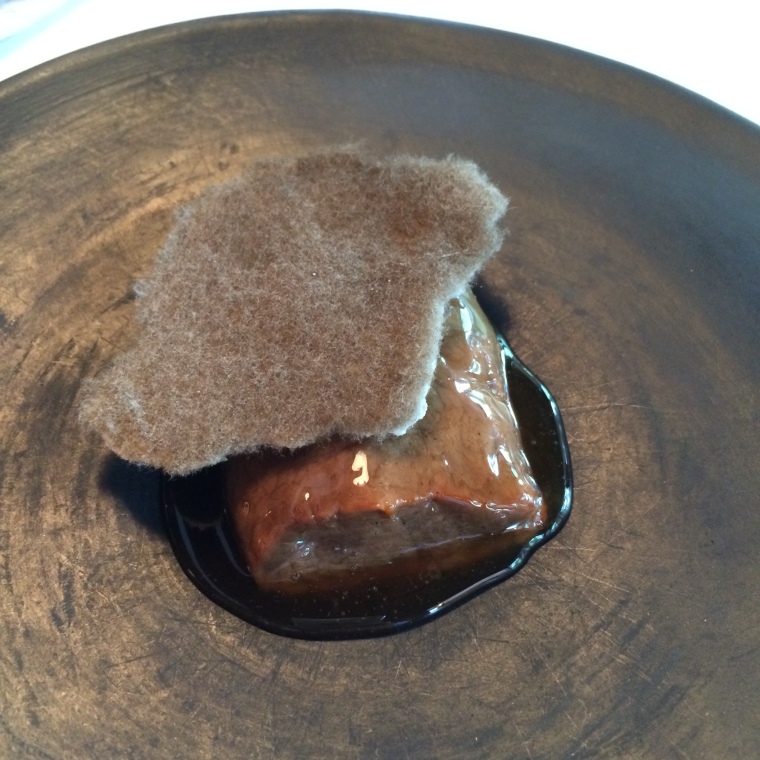 The maincourse was eucalyptus smoked lamb loin with its wool. The wool was soft and the meat perfectly cooked but with quite a strong smokey flavour, so it worked well as the last course.

The first pudding was stracciatella with sheets of dark chocolate. Not my favourite, I liked the chocolate but not the cream.

The lemon sorbet in edible lemon skin was a pure delight. Fresh lemon flavour and amazing texture. Loved it!

We read cronuts on the menu and got very excited but instead of the croissant dnut hybrid we got cronut shaped airy biscuits. I think they may have been made with rice starch, and flavoured with chocolate and caramel. Nice and different but not incredible.

The least sweet desert was a grilled green fig injected with marine preserve made with sea urchin. Such a fun and different combination and very very tasty. 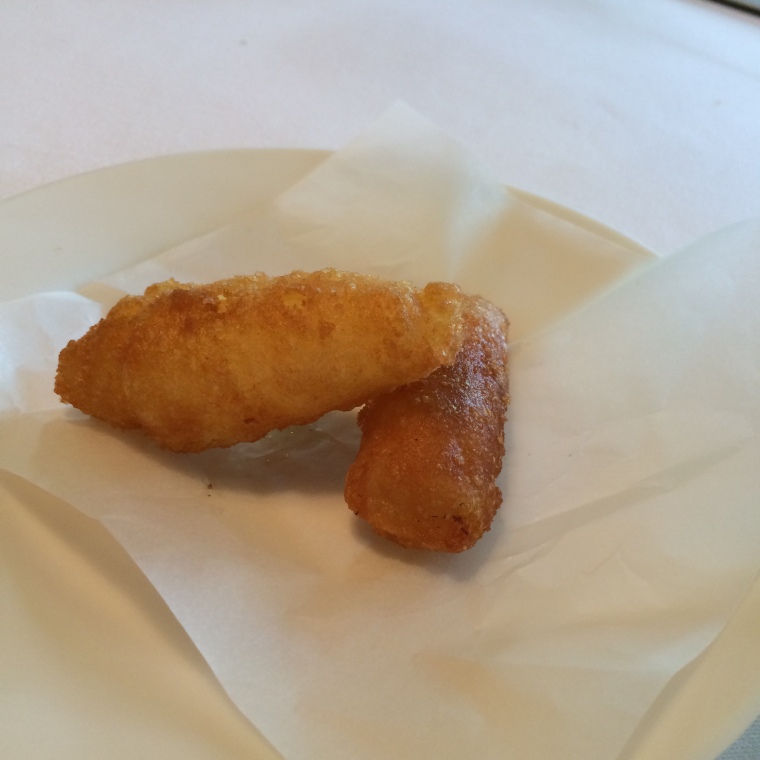 The last pudding was a warm and crisp little cigar filled with custard. We also got to grate sugar on them using the rocks in the table decoration (which was pure sugar). Both fun and delicious! 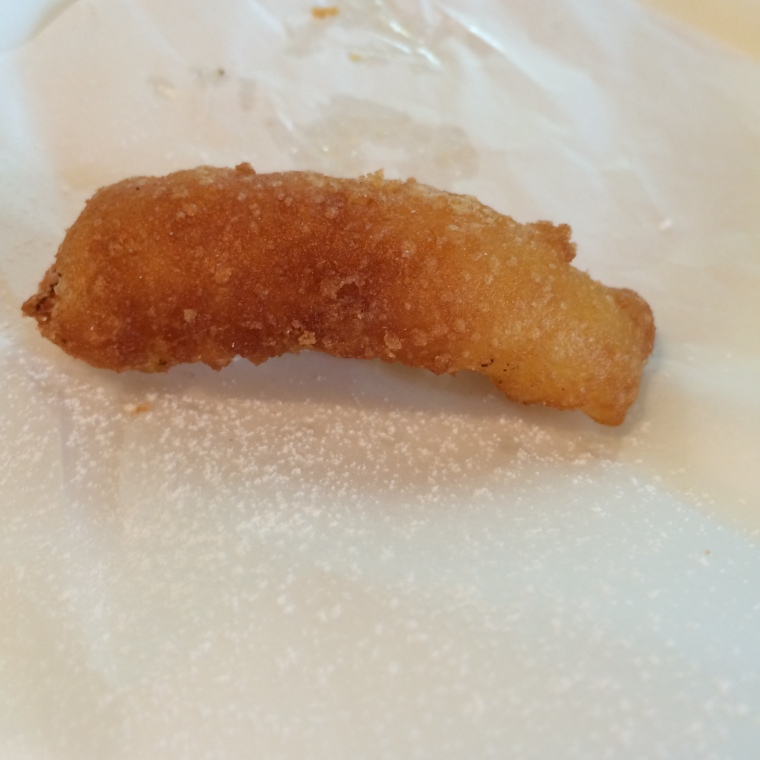 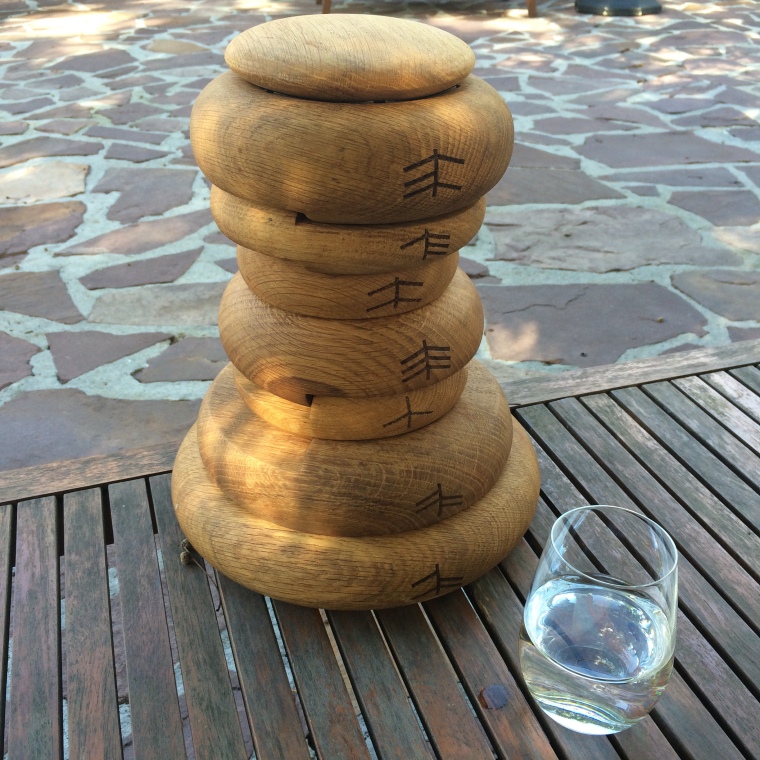 After are long lunch we went outside and got even more treats with our coffee. A whole tower of petit fours. We didn’t exactly need them but we still managed to eat them, we’re such troopers. 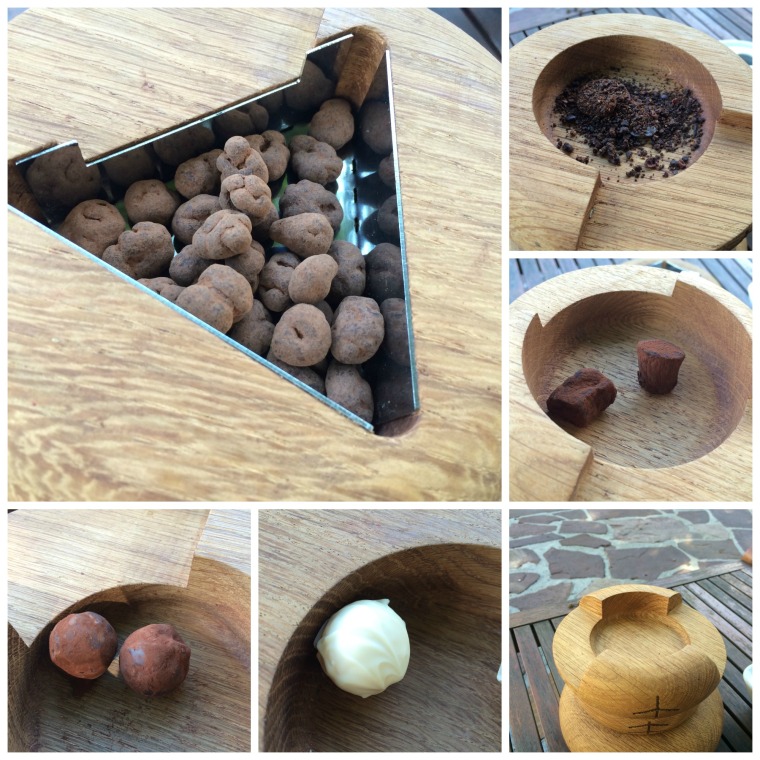 The tower had seven compartments that each represented one of the seven cardinal sins. As you can see above, I forgot to take a picture of one of them, but the ones I remembered were chocolate coins covered with chocolate dirt, candied ginger dipped in cocoa, chocolate covered corn kernels, white chocolate with rose cream and dark chocolate with caramel. 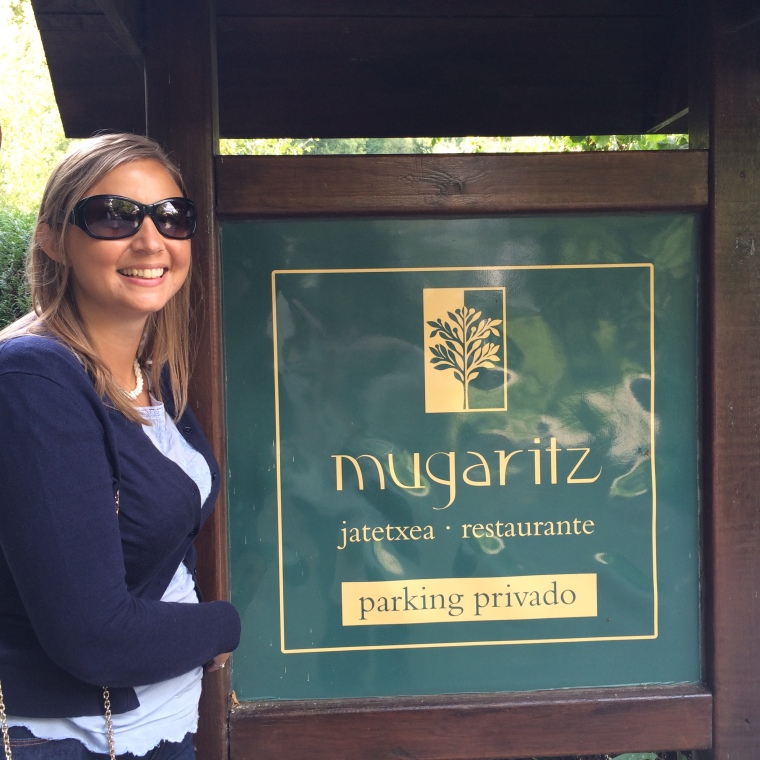 I was incredibly happy (and extremely full) after this meal. It was such an experience! Some dishes were absolutely delicious and others more interesting in texture or techniques used but I loved the whole experience. I also like the relaxed atmosphere and the fun elements of making our own dip and playing the knuckle game. The service was good but not flawless, which I would have expected. Sometimes dishes were stacking up on the table and if one of us went to the restroom (which is needed during a four hour lunch) they had already put out the next course before we got back to the table.

With that said, it was still incredible. It was so fun to see the kitchen and experience this type of cooking, and Caroline and I had a blast! And I still dream of some of the dishes.