When I was home visiting I had quite a lot of friends I wanted to meet up with. I went for dinner with some of them and the rest I gathered for a late Sunday brunch in Malmö at Rosen Bar and Dining, the restaurant in Malmö’s only five star hotel.

It is nice here, but not too swanky and at 2pm we almost had the dining room to ourselves, which we quite appreciated as we were twelve adults and two children.

As this, especially with Swedish standards, was quite late in the day for brunch, we were really happy with the substantial spread of non-breakfast items.

At the hot plate you could choose between broccoli quiche, tender ribs, potatoes, chicken drumsticks, the obligatory scrambled eggs and bacon as well as order your own dish straight from the kitchen. The menu, consisting of several omelettes and Eggs Benedict (or Florentine actually as it was ham free), was scribbled on a black board just next to the kitchen and it was nice with a little interaction from the kitchen. 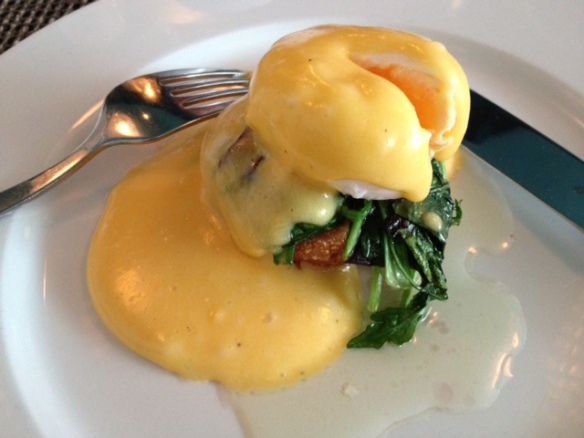 I had the Eggs Benedict (Florentine) which was really good. The English muffin was homemade and very tasty, the hollandaise rich and velvety but the egg slightly overcooked. Still really good on the whole.

At another station you found gazpacho, several cured hams (including a local spickeskinka), wild boar sausage and a few cheeses.

At another (chilled) station you found small pots with seafood in a mayonnaise dressing, small portions of Caesar salad, hot smoked salmon and cold smoked, even herring if I remember correctly.

There were also plenty of pastries, both French croissants and Swedish cinnamon buns, several bread rolls and breads. All the sweets were gathered at one table offering yoghurt and granola, lots of fresh fruit, mini cupcakes, brownies and rhubarb pie with custard.

Something we all really liked was the thought behind all the small portions, which made it so much easier to taste a wider spread and not to plate more than you could eat and therefore it much lead to less waste.

Also tea, coffee, sparkling and still water and four types of juice were included which I think is great. We will definitely be back, probably next time I am home to visit.