Although Malmö is Sweden’s third largest city (which perhaps doesn’t say that much when the country’s population is similar to London’s, but still) it hasn’t had a lot to offer in terms of great restaurants. There are a few great ones that I return too, but the restaurant business hasn’t been buzzing like in Stockholm and Gothenburg. Until now that is. Now there are plenty of new tables I want to try when I visit home.

But with that said, we did actually return to an old favourite when I was at home last. Partly because of the convenient location a mere five minute walk from my best friend and her husbands flat where we had a pre-dinner cocktail and after dinner musings and partly because it simply is very good.

There were seven of us dining together and I managed to photograph most plates, of course I forgot to take a picture of one of my own dishes. Doh!

The wild garlic soup (above) was velvety and nice served with melt in the mouth sweetbreads and red wine mayo.

The salmon tataki with quail’s egg, truffle and chives was lovely and fresh.

And the lamb with sage and pata negra ham was really good too. 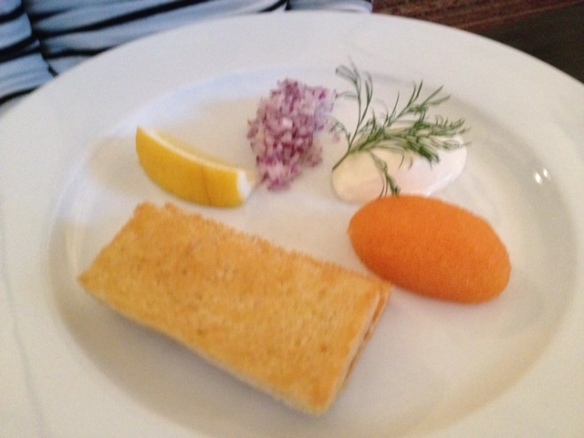 One of the most iconic Swedish starters; löjrom toast with creme fraiche and red onions, was delicious (as always). 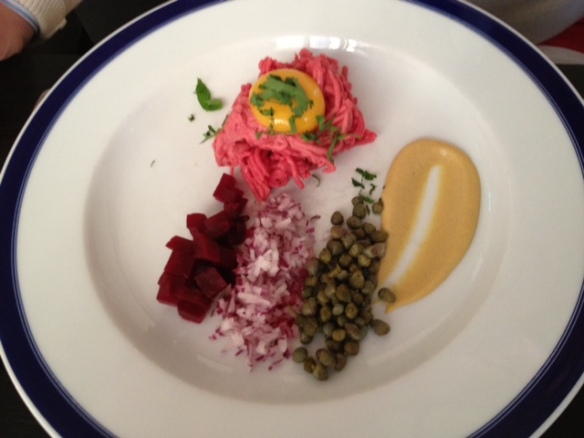 Deconstructed steak tartare was a hit with the men. I passed on it as I new it came deconstructed and I prefer mine mixed to perfection in the kitchen. But that’s just me. The pickled beetroots added a Scandi touch.

Everyone who tasted this dish (I sadly didn’t) all agreed it was the best one they had that evening. And it looks magnificent, doesn’t it? Duck breast, beets, almond bread, rygeost ( a smoked cheese from Denmark flavoured with caraway seeds) and shiitake mushrooms.

Also the monkfish with Jerusalem artichoke, tomato and pepper was very tasty and the fish was perfectly cooked.

It was the amazingly tender pig’s cheeks with lovage and celeriac I forgot to photograph, but I can assure you it was very good indeed. Personally I would have liked a little less lovage in there, but that’s because I am not a huge fan of that herb other than a substitute for stock.

A few of us couldn’t resist the puddings and most opted for the deconstructed (I sense a theme?) snickers bar with salted caramel, chocolate fondant, vanilla icecream and peanuts, but also the creme brulee was delicious.

We had a lovely evening here, just as I expected. And definitely the perfect place to catch up with old friends over food.

One thought on “Dinner at Atmosfär in Malmö, Sweden”