Pinxtos are extremely popular in The Basque Region and in the Old Town of San Sebastian there are plenty of pinxtos bars to choose from, each with their own specialities. 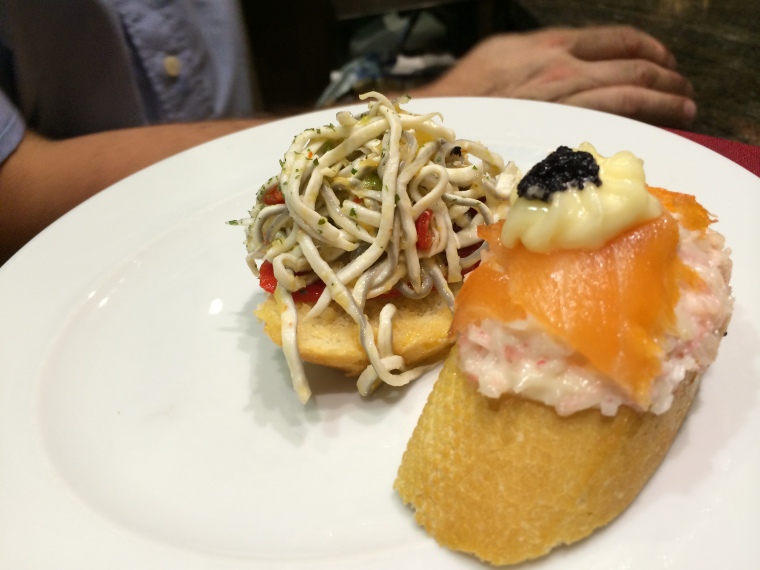 Our first night in San Seb, after the Mugaritz lunch, Caroline and I were still very full around 10pm but we decided to ignore those signals and have a few pinxtos just because we wanted to. We started slowly with one each and a glass of wine. Carolien had the one with mini eels and I had the one with crab, mayonnase and smoked salmon. 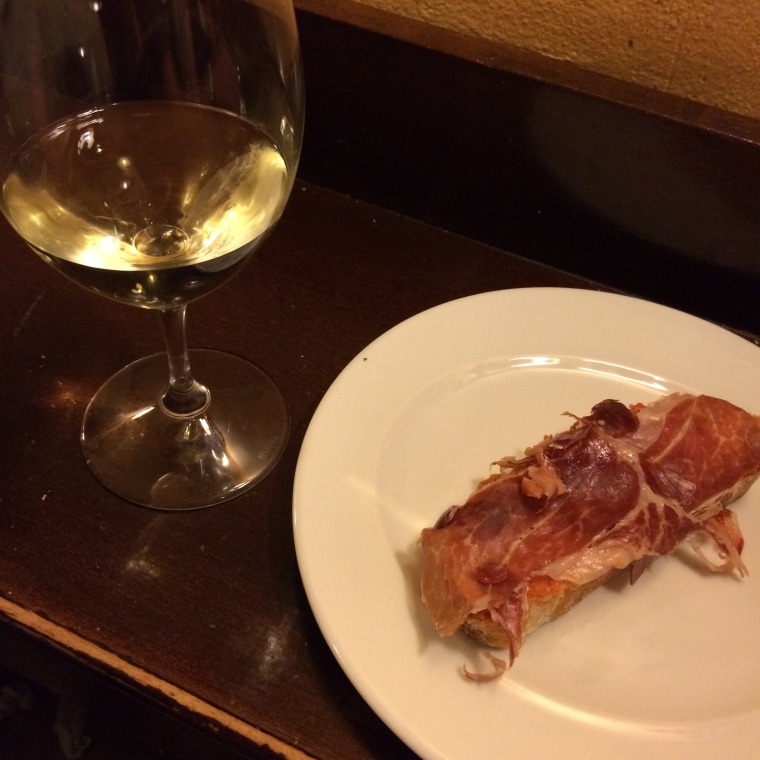 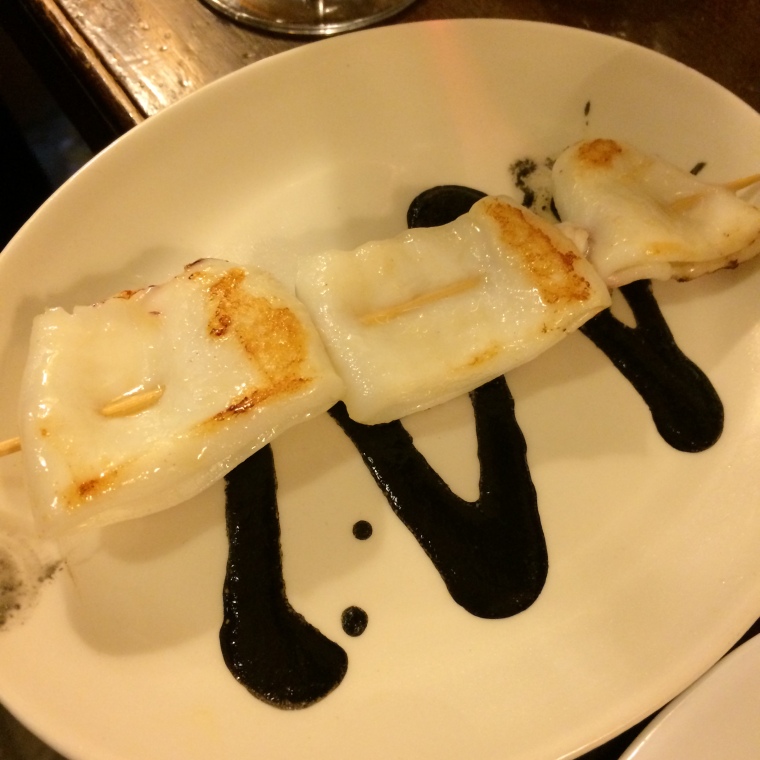 After a little breather we had another one each. I couldn’t resist the jamon and Caroline had the grilled squid with ink. Two pinxtos each was definitley enough and I’m so glad we did as I loved the atmosphere in the Old Town bars. The place we went to this evening is called Ganbara, and one I was desperate to try because a famous Swedish TV chef went here with the owners of Arzak when he was visiting San Sebastian. 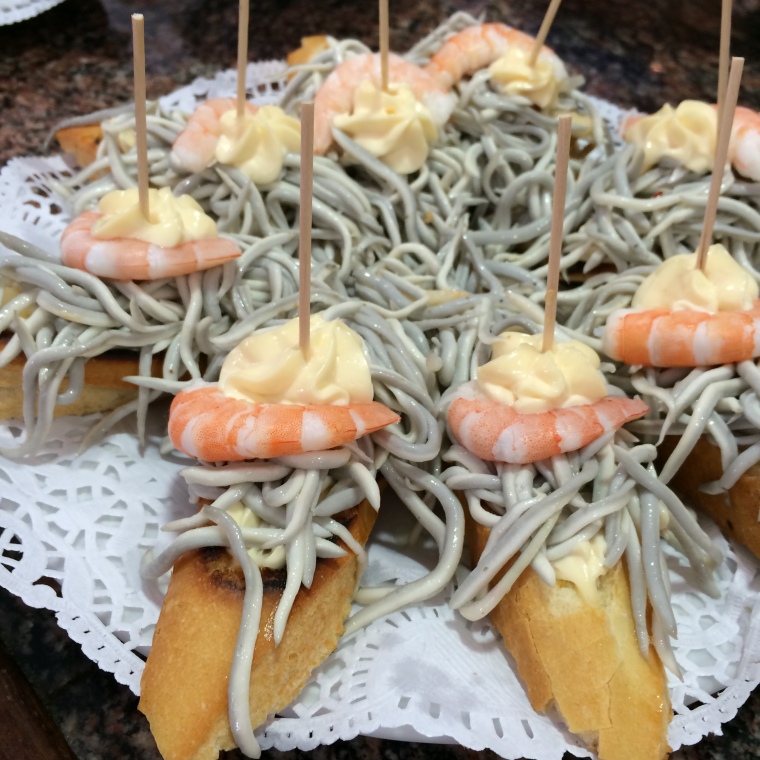 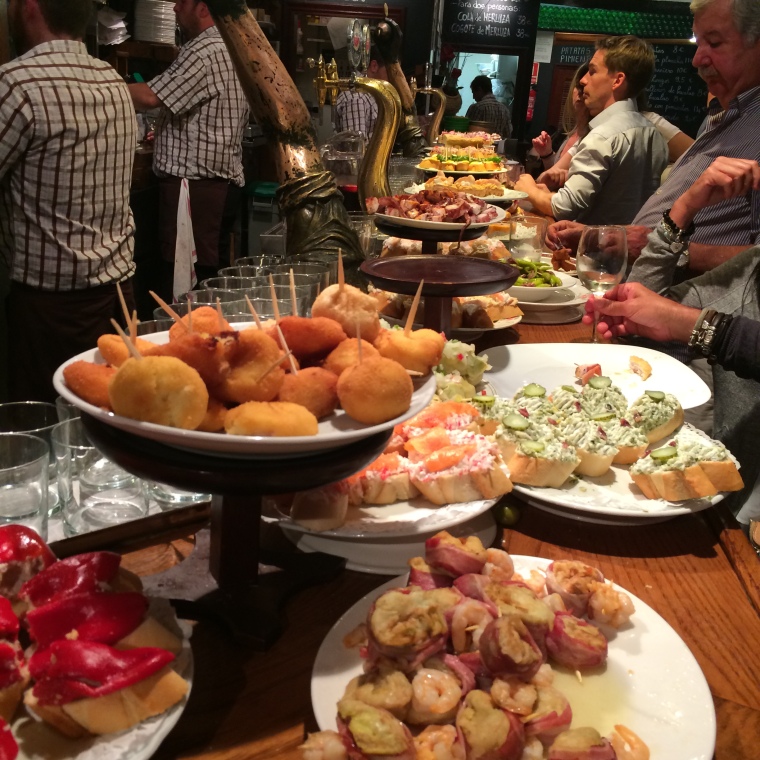 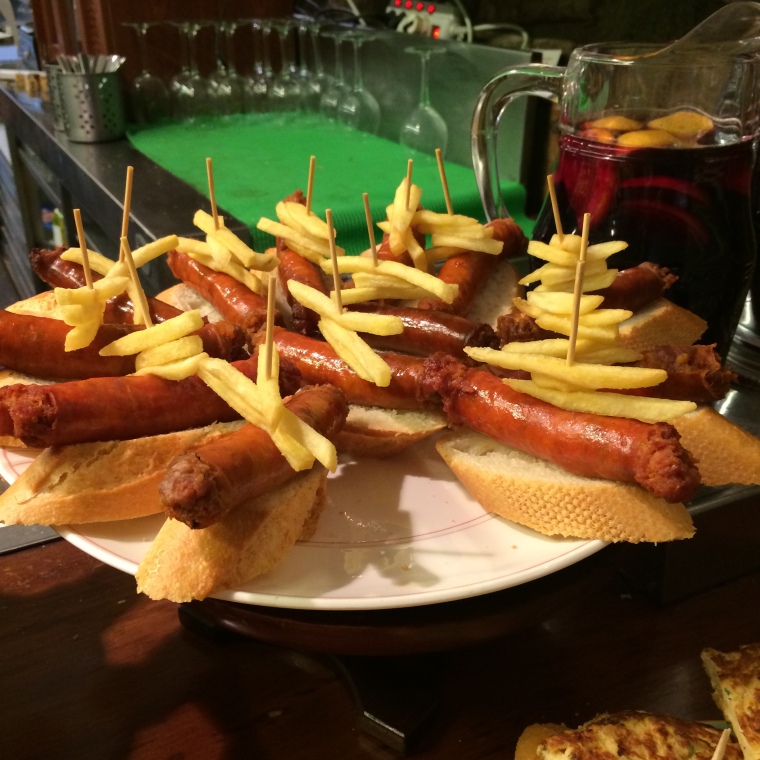 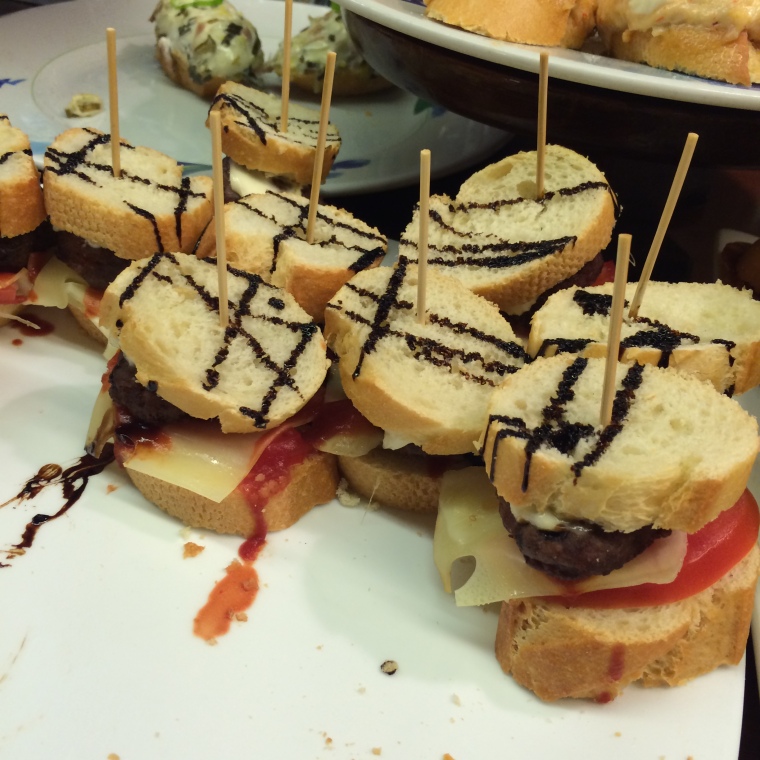 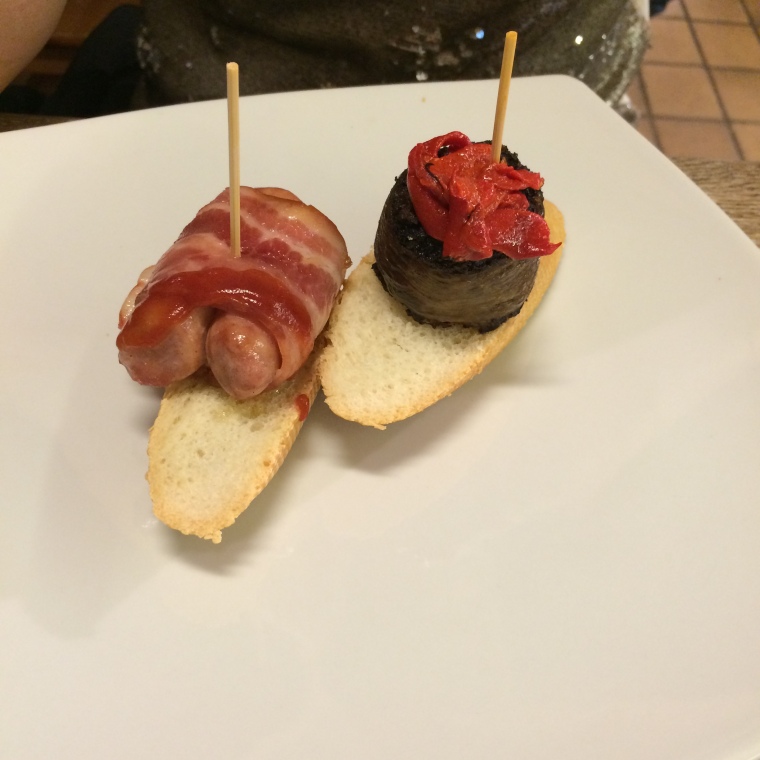 The second evening we did a proper pinxtos bar crawl, starting at Baztan. Caroline had the sausage wrapped in bacon and the morcilla (black pudding) with pickled peppers.

I had a yummy mini burger (great idea!) and cheesy courgette with ham. 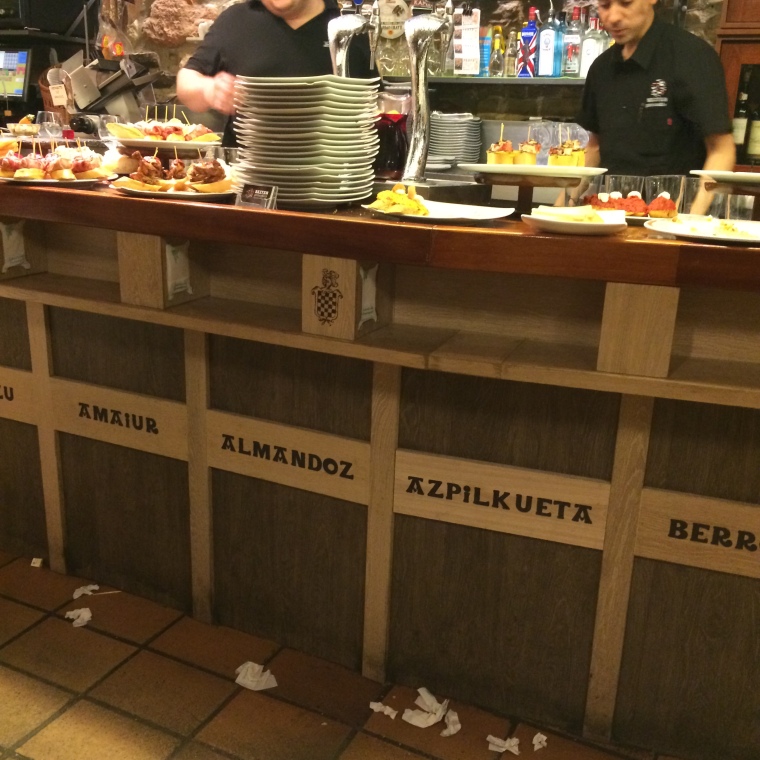 Apparently you just throw your serviette on the floor after your meal, but I struggled to do that. It makes sense in a way; the bars are packed and the staff have enough to do collecting dirty plates and glasses that collecting napkins isn’t a priority and it is easy to just sweep the floor after service. But still… 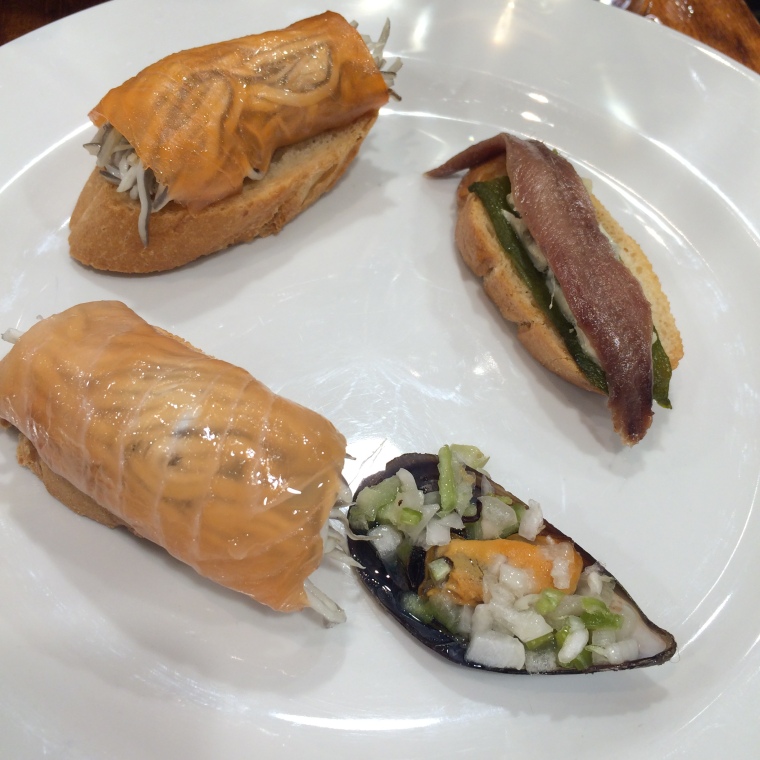 Next we went to Casa Vergara where we had the local slightly sparkling wine Txacoli which we really enjoyed together with some pinxtos; mini eels in smoked salmon, anchovies and green pepper and a marinated mussel.

At Casa Alcalde next door to Casa Vergara, we had one last pinxto with morcilla, fried quail’s egg and baked cherry tomato. Yum!

We had a look at plenty more pinxtos bars and some places seemed better than others (the ones we went for). Some had piles of deep-fried whatever and didn’t appeal that much to us.

Our last day we went back to Ganbara and had lunch in the restaurant. We started with a plate of wonderful jamon and the local equivalent to padron peppers, these were less spicy, but tasted very similar otherwise.

For the maincourse Caroline had the trio of cod which was rather interesting but not amazing. The one with the brown sauce was less tasty but the other two were quite nice.

I had local gambas, big juicy prawns, that were fried and served with olive oil and lemon. Super simple and delicious!

We went back to Ganbara one more time before leaving for the airport. It was early evening and because they had just stopped serving lunch it was quite bare with pinxtos on the bar counter but we could order from the menu. The pig’s trotters with mash, above, was sadly not amazing. I love pig’s trotters but these were too fatty for my liking. 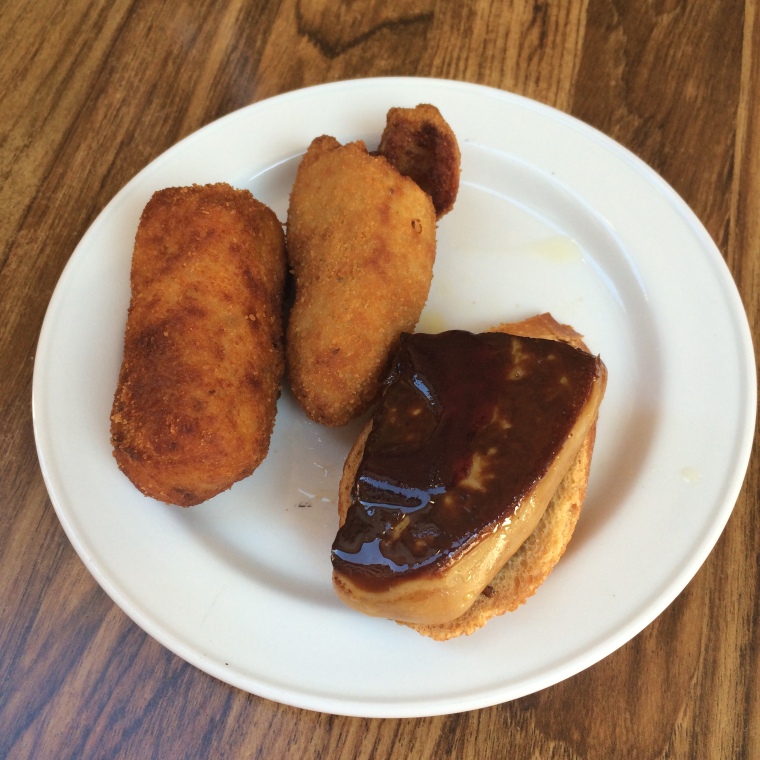 The croquetas with mushrooms and jamon were delicious though and so was the fried foie gras. 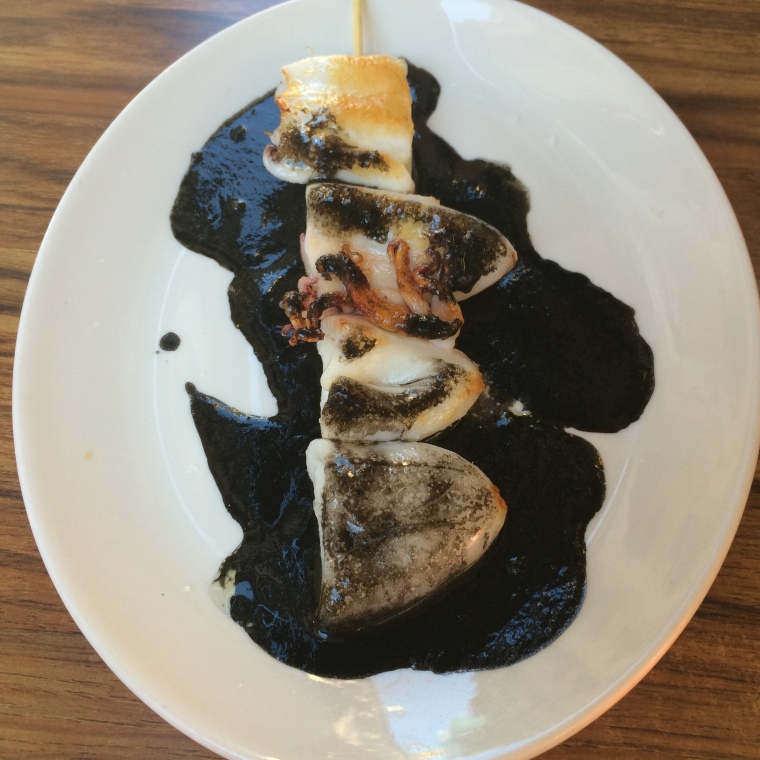 We finished off the meal with octopus and squid. I had the cold marinated octopus that I love, so soft and delicious and Caroline had the grilled squid with ink one last time. Despite a few let downs (the pig’s trotters and the cod) we loved Ganbara! All the other food we had here (and it was quite a lot) was great, the staff super friendly and the all the pinxtos super fresh!