After some work drinks on Friday, Caroline, her friend Kristen and I decided we needed some food and we went to a place I’ve been longing to try since Caroline first mentioned it to me a few months ago; La Bodega Negra. This Mexican restaurant and bar/café in the middle of the Soho bustle is just as great as I expected it to be and the atmosphere was amazing.

It was still warm outside when we arrived around 10pm and a large glass partition in the outside wall was removed so you sat half outside half inside and could watch the life on the street pass by. That and the great music (Motown and David Bowie on high volume) just added to the ambiance and it almost felt like we were in New York.

We all decided margaritas were the way to go; Kristen and I tried the frozen orange and passion fruit margarita while Caroline had a regular plain one.

Food wise we opted for some nibbles, starting with guacemole (mandatory if you ask me), chicken tacos and two types of quesadillas. 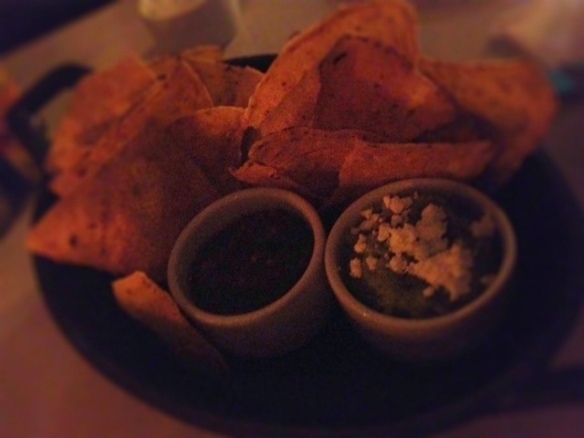 The tortilla chips were the crispiest I’ve ever had, so so good. The guacemole and roasted tomato salsa were also very good.

We had both shrimp and mushroom quesadillas and although both were good, I prefer the mushroom one – it was just brilliant.

The chicken tacos were delicious too and spicier than one might think, so no need for all that extra hot sauce. Caroline learnt that the hard way. 🙂

This might not look like enough to feed three people but it really did. I was too full to even finish my share of the mushroom quesadilla which I still regret as that was my favourite.