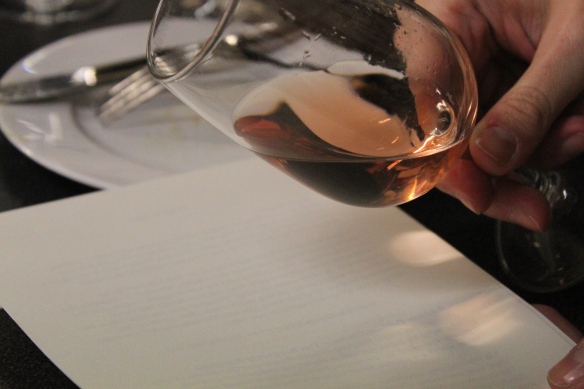 Remember the great wine tasting I went to in the autumn? Yesterday it was time for another one. Hosted at The Avenue Cookery School, Angie Steele prepared all the amazing food and Andrew Corben-Clarke from The Burgundy Portfolio talked us through the wines, mixing amusing anecdotes with facts.

We started off with a dry (Fino) sherry (Manzanilla “La Gitana”, Bodegas Hidalgo) and a classic bruschetta. I am not really a sherry drinker and although I thought this one was very nice with the bruschetta, I probably wouldn’t enjoy it without any nibbles. 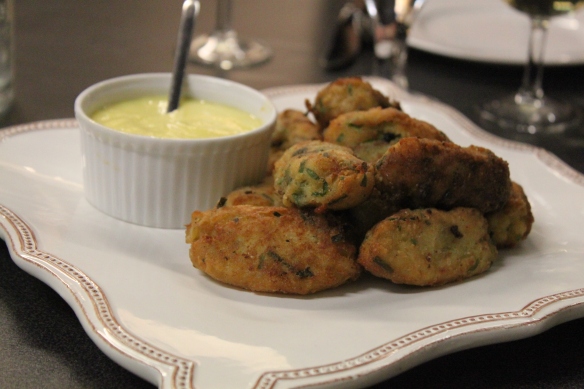 Next up was a wonderful 2010 Rully (David Moret) that was definitely more my thing. And served with fluffy yet crispy salt cod fritters with a saffron aioli, it was a match made in heaven. To me the wine tasted both buttery (yum) and fresh at the same time. 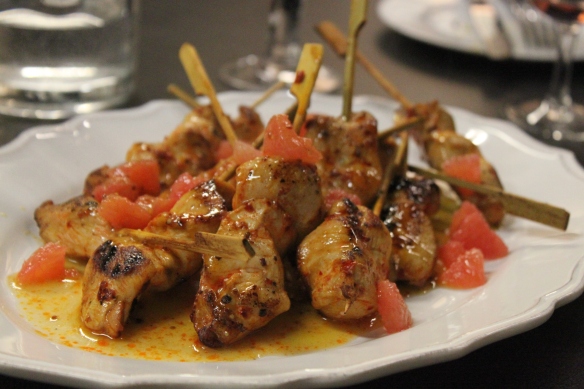 We also tried a rosé, 2011 Beaujolais Rosé Dom. de Sermezy, with harissa marinated chicken scewers with grapefruit segments and a citrus dressing. The wine was a mouthful of summer and the fruitiness complimented the citrus flavours of the dish. 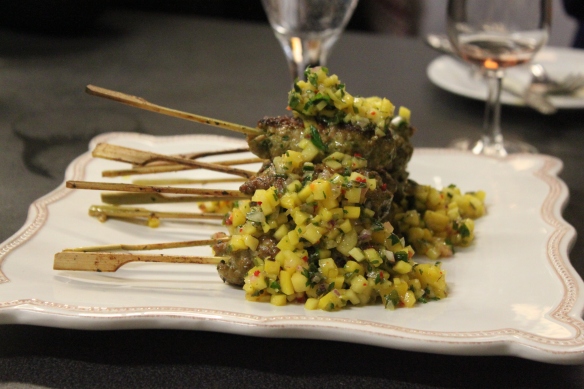 We then moved on to the reds. Firstly, a light 2009 Moulin-à-Vent (Dom. Benoît Trichard) and Thai pork and lemongrass scewers with mango salsa. The scewers were spicy and moorish, and although the wine was light I thought it held up the fiery food well. 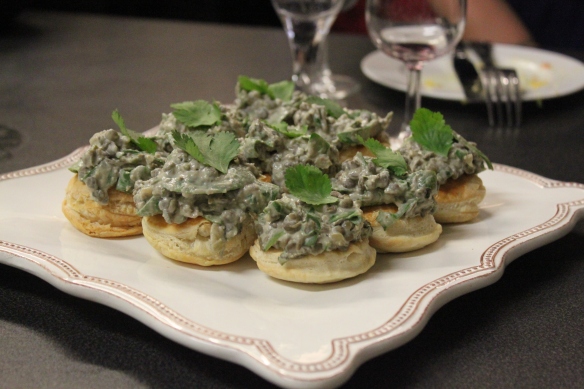 The next red was a real heavy-weight in comparison with the first one and bursting of flavour. 2008 “Star Terre”, Syrah, Oroncio worked really well with the puy lentil galettes with cumin and coriander. Andrew told us that it was the earthiness of the lentils (and the cumin) that really worked with this heavier wine, just like it would work with game or mushrooms. 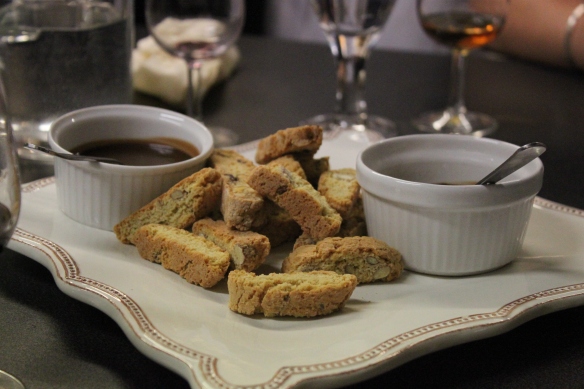 The tasting finished with something sweet; crunchy biscotti with a chocolate dipping sauce (oh yes!) and a wonderful Sauternes,1999 Ch. Doisy-Vedrines, 2eme Cru Classé. It was golden and utterly delicious and the perfect ending to the evening.

These type of wine tastings, with food, are definitely something I prefer to a stuffy all-wine tasting. Pairing the right food with the right wine is definitely a skill and just adds a whole different dimension to a meal. I already look forward to the next one!

Last Wednesday I went with my friend Emily to a wine tasting organised by one of her mother’s colleagues at The Avenue Cookery School. This was their first wine tasting, organised by Angie from the cookery school and Andrew from the Burgundy Portfolio, and Emily had helped spread the word.

What was so interesting with this particular wine tasting was the fact that the wines were paired with canapés perfect for each particular wine. It was so exciting to first taste the wines on their own and then with the food.

Unfortunately I only started taking photos half way through the tasting, as I was to embarrassed to leave my seat and interrupt to run out and get my phone from my bag in the room next door, but I got over it as you can see.

Once we arrived for the wine tasting we each got some sparkling wine to sip on while waiting for the others. It was a Crémant de Bourgogne (Dom. Agnès Pacuet) which I thoroughly enjoyed and even had several top-ups of. The two large tables were filled with goodies we expected was for later, but it was there for us to eat while we were mingling. So we helped ourselves to olives, crostini with Stilton, caramelized red onions and figs, charcuterie boards, and filled focaccia. All delicious!

When everyone had arrived we sat down and let Andew entertain us with stories and facts about the wines as he presented them. The first wine we tried, 2011 Petit Chablis, Dom. Nathalie & Gilles Fèvre was a light and fresh white what worked really well with both canapés it was served with. My absolute favourite was the brioche crouton with soft ash goat’s cheese and truffled pear, but the red pepper tarte tatin with tapenade and basil was gorgeous too.

Next up was another white; 2009 Bourgogne Blanc, Dom. Florent Garaudet served with mackerel tartar on an olive crouton with crispy skins. 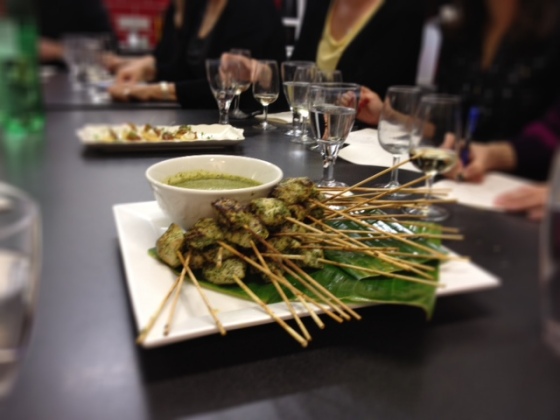 We then tried two Pinot Noir side by side; 2012 Santeney “Clos de Hates”, Dom. Bachey-Legros and 2009 Bourgogne Grance Ordinaire, Dom. Guy Castagnier. The former was lighter and the latter, which I preferred, tasted more of berries. We tried them with honey soy glazed salmon scewers and thai chicken scewers with a coconut and green chilli dip. 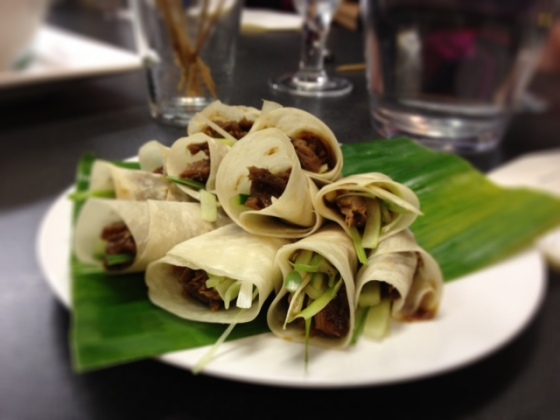 We then got to try a wine from the Rhone Valley; 2008 Star Terre Grenache, Oroncio served with crispy duck pancakes in hoisin sauce with cucumber and spring onion. Both divine! 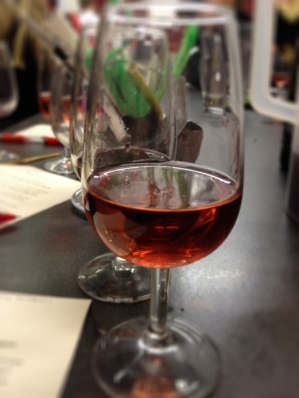 The last two canapés were sweet, put we didn’t try a single pudding wine. Instead we had a fruity rosé (2010 Bourgogne “Rose”, GAEC Felettig) with the caramelized banana tarte tatin, which was, although I am not that fond of bananas, delicious. 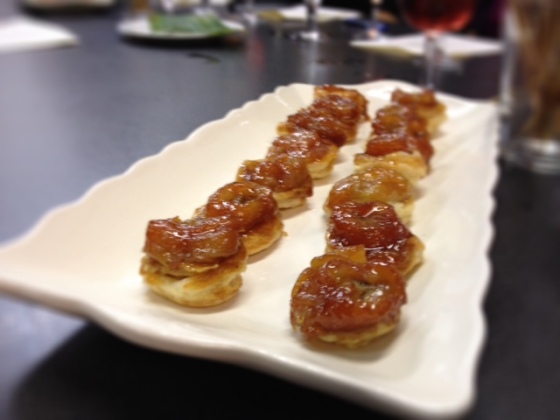 The last sweet, amazing chocolate fudge caramels with vanilla salt, was served with a really nice port ( 27 Grapes, Quinta do Portal). I like the idea of port and chocolate and will definitely try this at home.

I had such a lovely evening and would love to do this again. Both the food and the wines were excellent and I really enjoyed trying the wines with the matching food, so I know how to think when pairing food and wine at home.

Footnote: I was not invited as a blogger to this event, nor asked to blog about it.