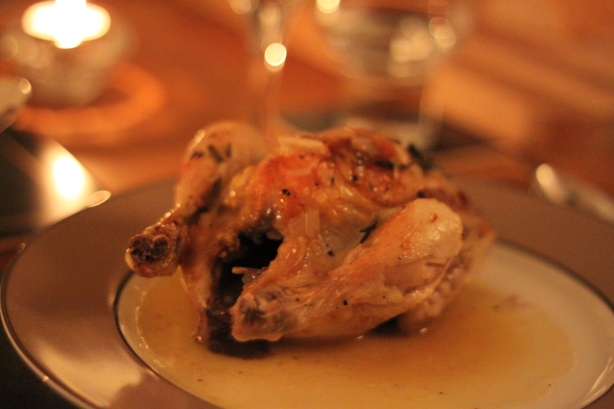 It is not the first time I have cooked poussins this way. I followed my usual recipe but simplified it and didn’t brown them before roasting them, and they turned out better than ever! However, it was the simple but lovely jus with rosemary and shallots that really improved the dish. Served with roast potatoes and chanteney carrots and a wonderful Rioja, this was a joyful meal. 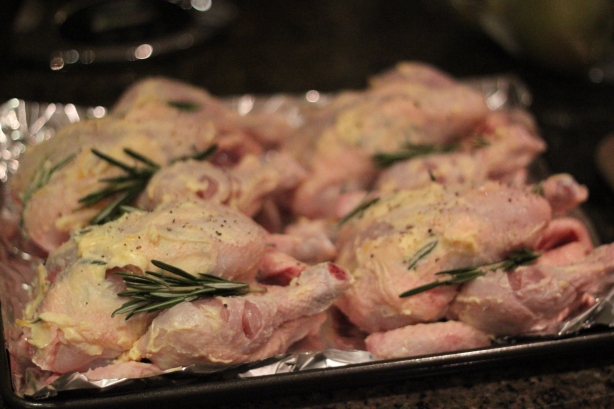 We finished this meal off with Christopher’s signature dessert – tarte tatin. We usually serve it with vanilla icecream but had pouring cream with it this time, and it was almost as good. 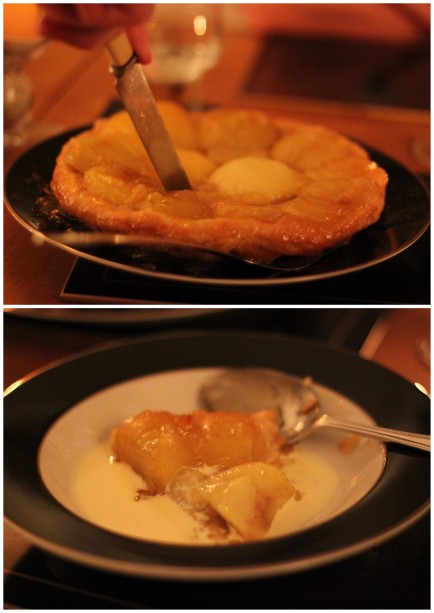 Poussins with rosemary and lemon, serves 2

1 lemon, the zest and some of the juice

Rinse the chickens and place them in a roasting tray covered with tin foil. Mix butter, lemon peel and juice, garlig and some rosemary leaves in a bowl. Make  cut at the top of the breast and insert your finger underneath the skin to create a pocket. Fill this with the butter and repeat for all the chickens. Make 2 cuts on each thigh and smear butter over it. Use the rest of the butter to coat the birds on each side. Season with salt and pepper on all sides. Place two rosemary sprigs on each bird, but remove them before serving. Fry in 200C for about 20 minutes or until the liquid is clear from the thigh joint. Wrap in tin foil and let it rest for at least 10 minutes.

Jus with rosemary and shallots, serves 4

the juice from the poussins (about 500 ml)

Fry the onion until soft in the oil in a large frying pan. Pour into the meat juices and stock and turn the heat on high. Place the rosemary in the liquid and let it reduce to around half and thicken. It goes slowly in the beginning, but since it has started to thicken it won’t take long until it is done. Remove the rosemary and lower the mat. Add the butter and turn the heat off. pour the jus over the chickens and serve.