When I went home to Sweden over Christmas and the new year I got to try two newish restaurants in Malmö (the third largest city in the country and the one near The Bridge), first B.A.R. and now Steak and Tapas.

When I moved away almost six years ago the restaurant scene was rather boring but now it almost seem to flourish.

Steak and Tapas is situated in the cellar beneath Hotel Tunneln in the centre of town and the white arched walls and rustic wooden tables contributes to the relaxed and cosy atmosphere of the restaurant. The menu is also relaxed with non-poncy with its tapas and steak sections (little surprise there).

I was here with four friends and we decided to share three Spanish cheeses, a focaccia (baked in a pot) and some olives to start before most of us moved on to the meat. 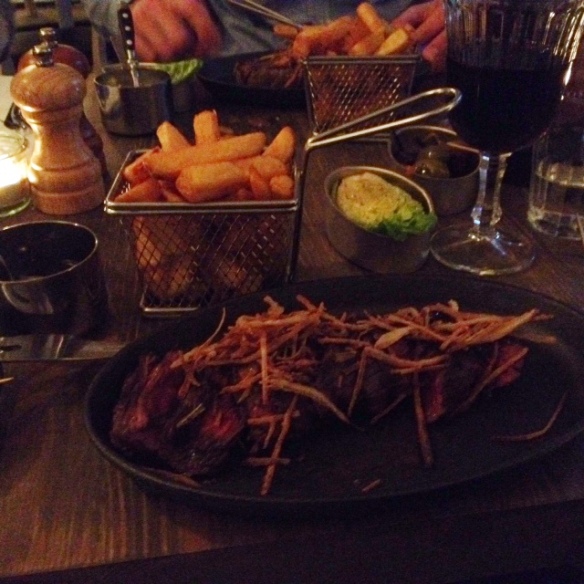 I chose the flatiron steak (onglet) and it arrived with an array of pots. One stainless steel dish for a salad wedge, a small deep-frying basket with fries (I like that quirky touche) and another bowl with the sauces. It felt a bit inefficient serving this many pots, but it looked rather charming.

One friend ordered the halibut instead and was also very pleased. The only let down was that some of the steaks were far from hot by the time they arrived at the table. I like my meat rested but this was a bit excessive..

Although the pudding section only had three choices we decided to share a chocolate cake with peanuts, marshmallows and chocolate sauce. It was a bit too dense and bitter for me and I don’t think we managed to finish it even though all five of us had some.

As a concept Steak and Tapas is very approachable, and I understand why you as a restaurateur in Malmö go for something that appeals to the masses, as the restaurant scene here is not as vibrant as say Gothenburg and Stockholm, even on a smaller scale.

Yet the combination strikes me as odd, but I imagined more cooked tapas and this is mainly charcuteries, cheeses and a few hot plates so it actually works to share a few things before moving on to steak or for a lighter meal sticking to the tapas section the whole meal.