In Sweden pork fillet is the most common cut of meat for dinner parties. I state that as a fact, and I am convinced I am right, but with no real research to back it up apart from my own experience.

What’s so good about the pork fillet it that it is lean meat that when cooked right is very soft and tender. And because of the cut being lean it means less flavour in the meat than tougher cuts, which then means that this is a very versatile cut. You can flavour it with anything you like.

I have come across thousands after thousands of recipes for this particular fillet in Sweden, but hardly any here in the UK. But then I found one, by Gary Rhodes. And it was just too tempting not to try it.

It is incredibly simple, but leaves a very tender meat. First you caramelise it whole in a frying pan, then transfer it to an oven until just done. Let it rest. Slice and serve. 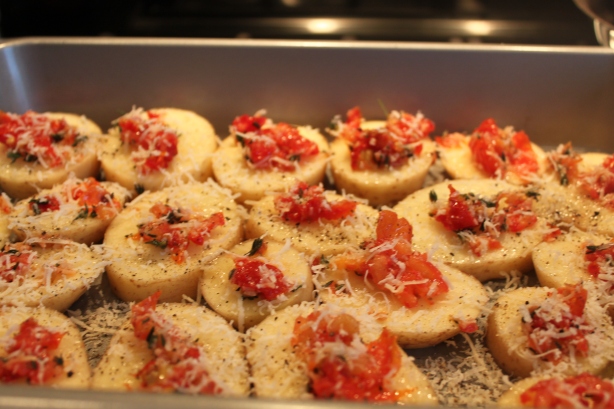 Because this cooking approach leaves a fairly bland (but delicious) meat it needs soemthing more flavoursome to go with it. I opted for thick potato slices, cooked in the oven with chopped sunblush tomatoes, thyme and grated parmesan. And with a cold dijon and honey sauce, this is a perfect dish for this time of year; the transition between summer and autumn.

Season the meat well on all sides. Pat it with some of the sugar. Place the fillet in a hot frying pan with the butter in. Add the remaining sugar and fry the meat until caramelised all around. Then either transfer the meat to an oven tray or place the frying pan (if it does not have a plastic handle) in a 200C oven for 12 minutes. Leave to rest in tin foil for at least 5 mins before slicing.

a few sprigs of thyme, just the leaves

Cut the potatoes into 1 cm thick slices and place on a baking tray. Chop the tomatoes finely and mix with the thyme. Place some of the mixture on each potato slice. Drizzle with olive oil, sprinkle with parmesan and add salt and pepper. Place in a low oven, 300 C for about 35 minutes or until the potatoes are cooked.

Mix all the ingredients. Leave for 10 minutes to intense the flavours.

2 thoughts on “Caramelised pork fillet, potatoes with tomatoes and parmesan, and a cold dijon and honey sauce”