Before we left for Syria I had googled restaurants, just to have other sources than Lonely Planet. And even though LP are great, I don’t always agree with their food section.  Most internet sources I found said the same; that the best restaurant in Damascus is Naranj. So we went there the first evening. And we were certainly not disappointed.

The restaurant is situated in the middle of the Old City, and when you step in, a member of staff is opening the door for you. It is a large restaurant and has two ‘rooms’. To the right is the larger ‘room’ and from there you can look into the busy kitchen. To the left is a smaller ‘room’ with smaller tables by the windows.  We ended up in the smaller section and it was great for people watching. We spotted a few ex-pats, some business men, three young arab men and some Japanese (I think) military officers (again, I think) in uniform. An eclectic mix! The interior was fresh with dark wood furniture and white table cloths.

Before we even had a chance to look at the menu, some nibbles appear: crisp bread with tapenade and a peppery dip. Both lovely.

We then decided to order some mixed mezze. It feels like you’ve got to when it is your first evening in the Middle East. Of course we ordered the usual stuff that we would order in London too, but a few unusual dishes as well. 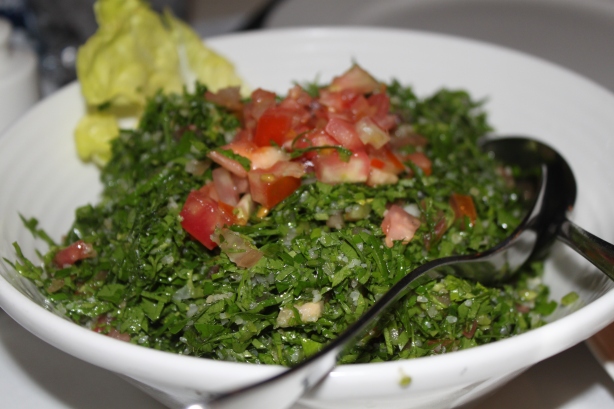 One of the ‘safe’ dishes was tabbouleh, which I have actually made once. But in the West we seem to have a lot of bulgur wheat in it, where as in the Middle East it is only a tiny bit, with lots more herbs. It was really nice and fresh but still had quite a punch from all the fresh herbs. 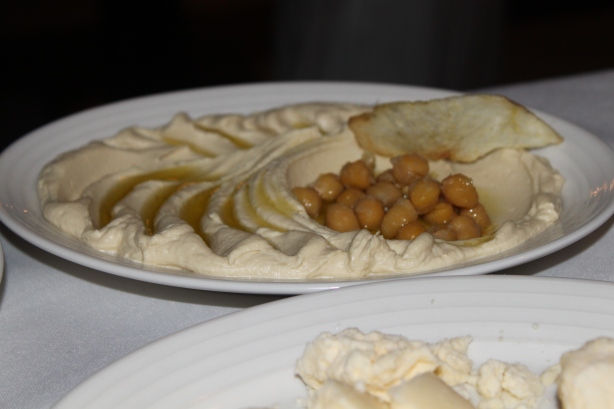 Hommus felt like a cliché, but of course we had to order it. It was really nice and creamy, but not that different to the supermarket version. In the foreground you see some Arabic butter which we also tried. I have had something similar in Turkey, but I didn’t really like it. It is less creamy than regular cow’s butter, and has a strong taste of sheep and/or goat’s milk. Not my thing, I’m afraid.

Marinated vegetables in olive oil were nice too.

What we enjoyed the most was the baba ganoush. I adore aubergine and this was amazingly good! Christopher enjoyed it too, even though he is less crazy about eggplants than me. 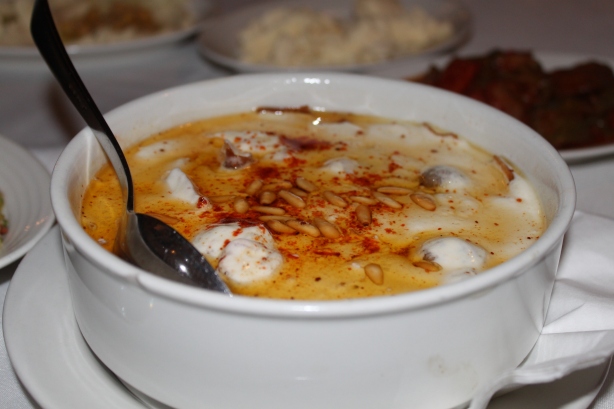 Nearly as lovely as the baba ganoush was the lamb meatballs with a yoghurt sauce. They were mild and soft, and had a nice flavour about them, and quite a tang from the sauce.

This is one of the unusual dishes: lamb in sour cherry sauce. A local delicacy, originally from Aleppo, Christopher had to try it. It was nice, but the sauce was too sickly for me. 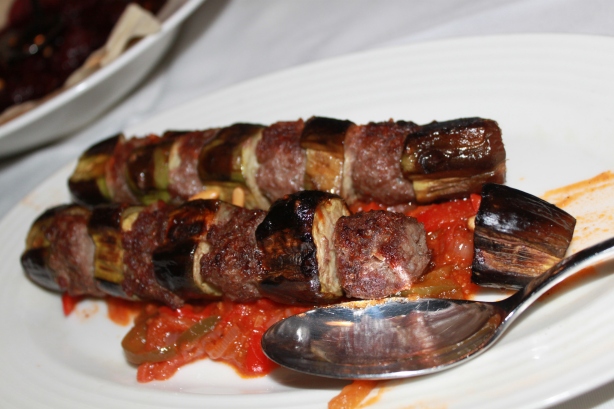 My maincourse was lamb kebab with more aubergine. It was really tasty, I’d really like to know how they so subtly season the meat. And barbecued meat – who can say no to that! I was glad I had a fairly light and healthy maincourse, because, we certainly had a big starter with all that mezze.

Even though we hadn’t ordered any dessert (we were too full to) we received a huge plate of little baked goodies, like bakhlava. And a massive fruit bowl. We can’t say no to food when it is right in front of us, so of course we tried most of the little desserts. We werevery full after that though…

This was the perfect place to discover Middle Eastern food, at least for us. Everything was very well cooked and fresh. The service was good and the restaurant had a good ambiance. It wasn’t expensive either, compared to London, but in Syria it is considered an expensive restaurant. I think we paid around £35-40 for two, which you don’t get much for in London.